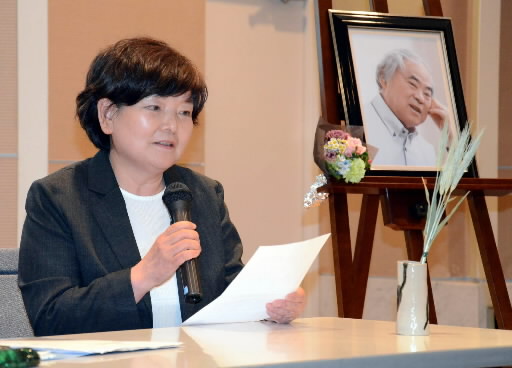 A previously unpublished poem by Keiji Nakazawa, author of “Barefoot Gen,” was read by his wife, Misayo, 70, at a special event in Hiroshima on June 4. The event at the Hiroshima Peace Memorial Museum was organized by fans to mark the 40th anniversary of the publication of “Gen,” which describes life in Hiroshima in the aftermath of the atomic bombing.

Mr. Nakazawa died in December of last year at the age of 73. The poem, which has three stanzas, was written six years ago when the writer was hospitalized in Hiroshima for surgery. It was found on a bookshelf at Mr. Nakazawa’s home in Naka Ward. In the poem, titled “Hiroshima: Rivers of Love,” Mr. Nakazawa faces the ocean and expresses his hope that the desire for peace may spread from the Hiroshima, the “City of Water,” across the seas of the world. The poem reads:

The Ota River where our love was nurtured
The riverbanks I raced along with my pay
Facing the rivers let me convey
Anger, sadness, kindness
Ah, the rivers, the rivers of Hiroshima
Reach the seas of the world

My cheek pressed against that of my dear child
Days reflected in the river’s surface
Facing the rivers let me pledge
Anger, sadness, kindness
Ah, the rivers, the rivers of Hiroshima
Travel the seas of the world

After reciting the poem, Misayo reminisced about Mr. Nakazawa, who began writing his manga about the atomic bombing in 1966 following the death of his mother. “He dashed it off in one sitting,” she said. “I think he got out everything he’d been holding inside.”

“Some of the pictures can be disturbing,” she added. “He was always thinking about how to draw the reader in through the story.”