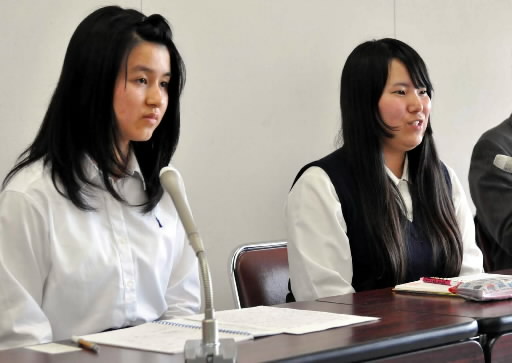 Ms. Matsuoka, a member of the Ten Thousand Signature Initiative launched by high school students calling for the abolition of nuclear weapons, said, “I intend to convey the passionate desire of youth for peace in the world.”

Ms. Kozakura was asked to convey the desire for peace by an A-bomb survivor she met at a peace education program when she was a second-year student in junior high school. With high hopes she said, “Those of us who can listen directly to the accounts of A-bomb survivors have to spread the desire for nuclear abolition.”

The peace ambassador program was launched in 1998 by the High School Peace Ambassador Dispatch Committee, a citizen’s organization located in the cities of Hiroshima and Nagasaki. This year’s ambassadors are the 16th delegation to be dispatched. Ms. Matsuoka and Ms. Kozakura were selected from among 28 participants in a selection conference held in Hiroshima Prefecture.