Learning the spirit of Gen from wheat 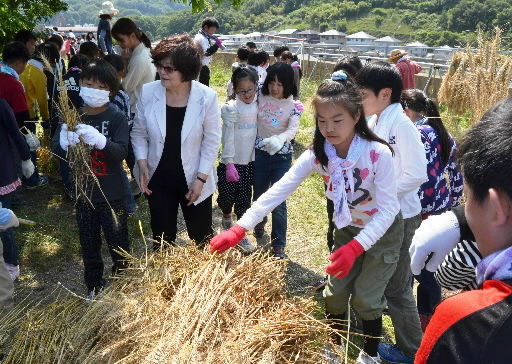 On June 7, 93 fourth-grade students of Yanominami Elementary School in Hiroshima’s Aki Ward harvested the barley and wheat they grew at the school. Wheat is a symbol derived from manga artist Keiji Nakazawa’s masterpiece Barefoot Gen. Mr. Nakazawa, who passed away at the age of 73 in December 2012, gave his last speech at this school. With the help of Mr. Nakazawa’s wife, Misayo Nakazawa, 70, and local volunteers, students and participants pondered Gen’s power to endure, and did so in the context of abolishing nuclear power.

The grains were planted on the roof of the school in gardens provided by the non-profit organization Ichinen-hokki (Resolve to Do) chaired by Tomiko Hirata. Ichinen-hokki is sending seeds of those grains around the world to convey Mr. Nakazawa’s wish for peace. The school’s barley and wheat were planted in November 2012 by third- and fourth-grade students who have tended the gardens ever since.

Carefully reaped by students and Mrs. Nakazawa, 25 kg of barley and wheat were harvested. The wheat will be processed and served in udon (a traditional Japanese noodle dish) for school lunch before summer vacation. Some of the barley and wheat seeds will be given to Japanese non-profit organizations to convey Mr. Nakazawa’s wish for peace. Ayaka Kabuchi, 9, a student at the school, said, “I hope those seeds will go all over.”

Mrs. Nakazawa appeared delighted. “The wheat is Gen. It grows up strong after being stepped on. I’m very sorry my husband could not attend the planting. He was in the hospital at the time and passed away shortly thereafter. But he knew it was happening and wanted to be there. Still, it is wonderful that wheat has now become a symbol of the determination to achieve peace.”