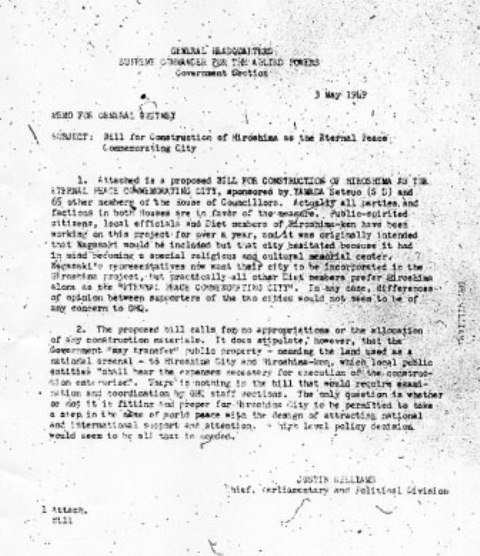 A document showing that the General Headquarters of the Allied Powers (GHQ) gave its approval to the enactment of the Hiroshima Peace Memorial City Construction Act has been found. The law, which was promulgated in 1949, served as the foundation of Hiroshima’s reconstruction in the aftermath of the atomic bombing. The document is a memorandum from Justin Williams, chief of GHQ’s Parliamentary and Political Division, to Major Gen. Courtney Whitney, who served as chief of the Government Section and was close to Gen. Douglas MacArthur, Supreme Commander for the Allied Powers. The staff of the Hiroshima Municipal Archives located the document among copies of the papers of Mr. Williams that are housed in the collection of the National Diet Library.

The memo was drafted by Mr. Williams on May 3, 1949 in response to a visit by Setsuo Yamada, a member of the Upper House of the Diet (later mayor of Hiroshima), and others.

The first paragraph provides background on GHQ’s approval, noting that the bill was “sponsored by Yamada Setsuo and 65 other members of the House of Councillors.” It goes on to say, “Actually all parties and factions in both Houses are in favor of the measure. Public-spirited citizens, local officials and Diet members of Hiroshima-ken have been working on this project for over a year…”

The second paragraph states, “The proposed bill calls for no appropriations or the allocation of any construction materials. It does stipulate, however, that the Government ‘may transfer’ public property – meaning the land used as a public arsenal – to Hiroshima City and Hiroshima-ken, which local public entities ‘shall bear the expenses necessary for execution of the construction enterprise.’ There is nothing in the bill that would require examination and coordination by GHQ staff sections. The only question is whether or not it is fitting and proper for Hiroshima City to be permitted to take a step in the name of world peace with the design of attracting national and international support and attention. A high-level policy decision would seem to be all that is needed.” A copy of the bill was attached to the memo.

After submission of the bill to the House of Councillors on May 9 of the same year, a bill with the same content was hastily submitted to the House of Representatives on May 10 and approved the same day. The Upper House passed the bill on May 11. After Hiroshima residents voted on a referendum, the first in the nation’s history, the law was promulgated on August 6. Plans for the construction of Peace Memorial Park and for the voluntary conveyance of 34 hectares of government-owned land subsequently moved forward.

The memoirs of some people involved state that Hiroshima made an effort to obtain MacArthur’s approval, but “the thinking inside GHQ and their actions are corroborated by records from those days,” said Toshikuni Nakagawa, director of the municipal archives.

In 1979 Mr. Williams donated documents he had drafted while at GHQ to the University of Maryland, where he served as assistant to the president. The National Diet Library acquired copies of the 43 reels of microfilm, which it has made available to the public since 2002. Mr. Williams died that same year at the age of 96.

Comments by Norioki Ishimaru, former professor at Hiroshima University and authority on the passage of the Hiroshima Peace Memorial City Construction Act

The bill could not have been enacted without the approval of GHQ, and this memo clearly demonstrates that. GHQ kept a close eye on what was going on in Hiroshima. Meanwhile Hiroshima tried to bring about the city’s recovery by advocating its reconstruction as a “peace-commemorating city” while avoiding criticism of the dropping of the atomic bomb. It would be helpful if more were known about the background behind the city’s recovery during the Allied Occupation.