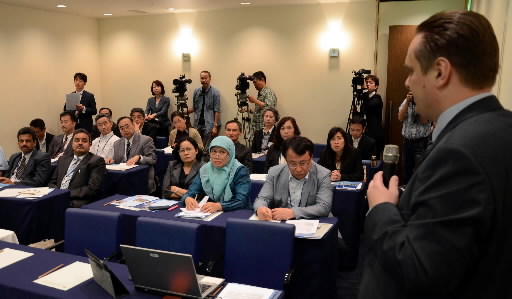 On June 10, a workshop to teach medical treatment of exposure effects following radioactive accidents began at a hotel in Naka Ward, Hiroshima. The workshop targeted researchers from Asian countries, where radiation is increasingly used in the process of nuclear power plant construction and in the medical profession. It was the first program sponsored jointly by the International Atomic Energy Agency (IAEA) and the Hiroshima International Council for Health Care of the Radiation-exposed (HICARE), an organization formed by Hiroshima Prefecture, the City of Hiroshima and other entities.

The participation of nine physicians and researchers from eight countries reflected their countries’ development policies: for example, India and South Korea are actively building nuclear power plants, while the Philippines and Vietnam are developing high quality medical care.

On the first day, IAEA radiation biologists and professors of Hiroshima University explained a method of estimating radiation dose that focuses on radiation-induced cell mutations, as well as the countermeasures taken after the accident at the Fukushima No. 1 (Daiichi) Nuclear Power Plant.

Dr. Wanwisa Sudprasert, 49, from Kasetsart University, Bangkok, Thailand, said that she hoped to absorb the knowledge accumulated by the A-bombed city of Hiroshima.

In 2010, HICARE and IAEA agreed to carry out joint research and human resource development projects. The five-day workshop will continue until June 14. Participants will visit the Radiation Effects Research Foundation (RERF, Minami Ward) and Peace Memorial Museum (Naka Ward). Toshiteru Okubo, president of HICARE and chairman of RERF said, “Thanks to the cooperation of the IAEA, all the lecturers are terrific. I would like these researchers to deeply study the effects of atomic bombing in Hiroshima.”