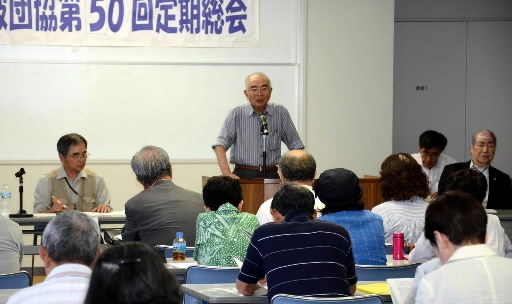 On June 14, the Hiroshima Prefectural Confederation of A-bomb Sufferers Organizations, chaired by Kazushi Kaneko, convened a regular general meeting in downtown Hiroshima to determine its course of action for fiscal 2013. The organization plans to make further efforts to press the Japanese government to abandon its reliance on the U.S. nuclear umbrella.

About 50 members of the group, including executive members, attended the meeting. With a movement to outlaw the use of nuclear weapons, highlighting their inhumanity, now spreading across the world, the organization agreed to pursue steps to strengthen this trend. The members also agreed to bolster their signature-collection efforts aimed at a total ban on nuclear arms.

In addition, the group set down seven actions that it intends to undertake. These include enhancing its study sessions in order to convey the A-bomb experience and advancing its campaign to eliminate the use of nuclear energy in Japan.

The Hiroshima Prefectural Confederation of A-bomb Sufferers Organizations also passed a special resolution to protest the Japanese government’s decision not to support the joint statement on the humanitarian impact of nuclear weapons that was issued at the second session of the Preparatory Committee for the 2015 Nuclear Non-proliferation Review Conference in Geneva, Switzerland in April. On the same day, they sent a letter of protest to Prime Minister Shinzo Abe at his official residence.