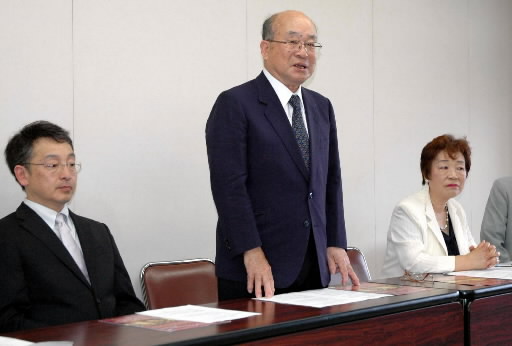 The executive committee of the Japan-U.S. Cultural Exchange Project in Hiroshima, chaired by Yasuo Harada, former president of Hiroshima University, announced on June 20 that the committee will ask students in Hiroshima to submit lyrics for a choral song on the theme of peace and hope. This appeal is part of a project to commemorate the 70th anniversary of the atomic bombing in 2015. An American composer will write music to the lyrics, and the song will be performed at a concert to be held at United Nations Headquarters in New York next March.

Applicants must be students of elementary, junior high, or senior high schools, living or attending school in the city of Hiroshima, or are members of choirs based in the city. The lyrics should not consist of more than 300 characters or two verses. Application forms will be distributed soon to each school in the city and the application period is from July 16 to August 15. Awards will include one grand prize, two awards for excellence, and several others for merit. The prizes, including certificates, will be given to the winners at the end of August.

The concert at U.N. Headquarters, where the song will be performed for the first time, is an event connected to the U.N. Human Settlement Programme (UN-HABITAT). People from Hiroshima and New York will sing the song in chorus.

The executive committee for the project was formed this past spring, mainly by the Hiroshima Choral Association and the Japan-America Society of Hiroshima. The committee is also planning to invite the United Nations Singers to Hiroshima for the 70th anniversary of the atomic bombing. In a press conference held at Hiroshima City Hall, Mr. Harada said, “I hope to make a song that will be sung for a long time to come.” For further information, contact the executive committee at 082-261-0027.