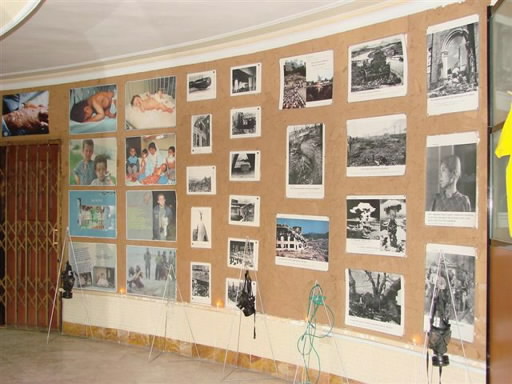 The Tehran Peace Museum, which conveys the damage wrought by the atomic bombings and poison gas attacks, has been selected as the “best museum” in Iran by the International Council of Museums, an NGO headquartered in France. The museum, which transmits anti-nuclear and peace messages from the capital of a nation suspected of seeking to develop nuclear weapons, has built its reputation through grassroots exchanges between the institution and the people of Hiroshima.

Located in a park in Tehran, the museum is operated by the Society for Chemical Weapons Victims Support (SCWVS), an NGO based in Iran. Roughly 500 square meters in size, the museum holds such materials as photo posters created by the Hiroshima Peace Culture Foundation, based in Hiroshima, and documents which describe the damage caused by poison gas during the Iran-Iraq War.

Iranian members of the International Council of Museums decided to honor the Tehran Peace Museum in May. Behind this decision are such efforts by the museum as providing opportunities to hear personal accounts from poison gas sufferers, an activity modeled after survivors’ testimonies in Hiroshima, and organizing gatherings for disarmament.

MOCT, an NPO located in Higashi Ward, Hiroshima, launched exchange efforts with SCWVS in 2004. Nearly each year since then, poison gas sufferers have visited Hiroshima to attend the Peace Memorial Ceremony in August.

It was these visits to Hiroshima by poison gas sufferers that sparked the desire to leave a legacy of their experiences through the establishment of a peace museum. With the City of Tehran donating a building for this use, the museum opened in 2007. Most of the materials concerning the atomic bombing were given to the poison gas sufferers by Hiroshima Peace Memorial Museum and brought back to Iran. When the museum was renovated in 2011, it also held an A-bomb exhibition.

In mid-June, the United States concluded that poison gas has also been used in the civil war taking place in Syria. Shizuko Tsuya, 58, the president of MOCT, pledged further cooperation with the museum and said, “If the U.S. analysis is true, another tragedy has occurred. Both poison gas and the atomic bombing cause human beings to suffer for a long time. It is especially significant that the peace museum in Iran is appealing for the abolition of such inhumane weapons.”