Desire to convey spirit of forgiveness: “It is war that is wrong” 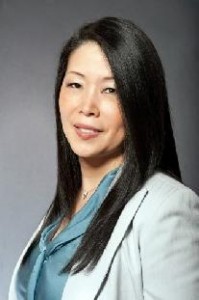 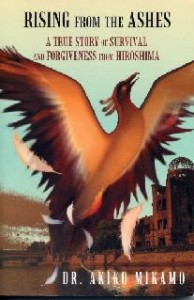 A Hiroshima native has written a book describing the experiences of her parents in the atomic bombing and their lives in its aftermath. Akiko Mikamo, 52, a clinical psychologist who lives and works in San Diego, California, published her book, “Rising from the Ashes: A True Story of Survival and Forgiveness from Hiroshima,” which was written in English, at her own expense.

Ms. Mikamo’s father Shinji, 87, a resident of Higashi Ward, was 19 years old at the time of the A-bombing. He was in Kamiyanagi-machi (now Kaminobori-cho in Naka Ward), 1.2 km from the hypocenter, when the bomb was dropped. The right side of his body was badly burned. His father, who was with him at the time, was never found, and his mother died of illness at her family home in Okayama. Shinji’s elder brother was killed in the war, so he was left with no family and struggled in the postwar years.

Akiko’s mother, Miyoko, who died in 2008 at the age of 80, was 18 at the time of the A-bombing. When the bomb was dropped she was just 700 meters from the hypocenter in the Fukuya department store (in what is now Ebisu-cho, Naka Ward). Shards of glass pierced her back.

Growing up, Akiko often heard her parents’ accounts of their A-bombing experiences, particularly from her father. She said he always talked to her about the importance of a spirit of forgiveness and gratitude and said that while the dropping of the A-bomb was problematic, the fault lay with the war itself, not the United States. Her father also wanted her to be able to understand people in other situations, she said.

Ms. Mikamo went to the U.S. in 1989 to study psychology. After that she had a growing desire to write about her parents’ experiences in English so that people around the world could learn of the reality of the A-bombing.

Ms. Mikamo was inspired to publish her book after founding San Diego-WISH: Worldwide Initiative to Safeguard Humanity in August 2010, the 65th anniversary of the A-bombing. She began writing the book desiring to convey to young people the extent of the devastation caused by the A-bombing and in the hope that weapons of mass destruction, including nuclear weapons, will not be used again.