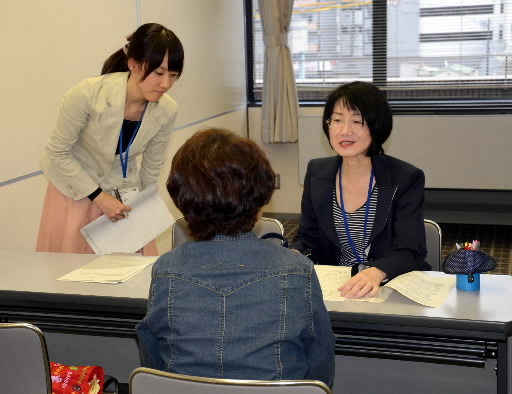 On October 24, Hiroshima Prefecture and the City of Hiroshima began a mobile consultation service, free of charge, for those who have concerns about their health stemming from their exposure to the “black rain” which fell in the aftermath of the atomic bombing. This service, which looks at cases of exposure that lie outside the area covered by the national relief law, started in Aki Ward and will move to six other locations in the city by the end of February next year.

Three experts, including a physician who is an expert on radiation medicine, a clinical psychologist, and a public health nurse, were on standby at the Aki Ward General Welfare Center on this day. Two people came for consultations, saying, “I can’t sleep because I’m in a constant state of poor health,” and “My family died of cancer, and I’m afraid I’ll be next.” Based on their histories, the physician recommended that they visit suitable specialists.

One woman, 71, a resident of Aki Ward who was exposed to the atomic bomb in Funakoshi-cho (today’s Aki Ward), said, “I’m glad I could tell them about my condition, but I’m still concerned. I hope Funakoshi-cho will be included in the designated area covered by the relief law.”

Hiroshima Prefecture, the City of Hiroshima, and seven neighboring municipalities are requesting that the national government expand the designated area six-fold. On October 1, the municipalities opened permanent windows staffed by public health nurses. The mobile consultation service, which is sponsored by the national government, will also be held in Asakita, Saeki, and Asaminami Wards. In each of these wards, the service will be given twice. A prior reservation is required, and 156 people have already applied.