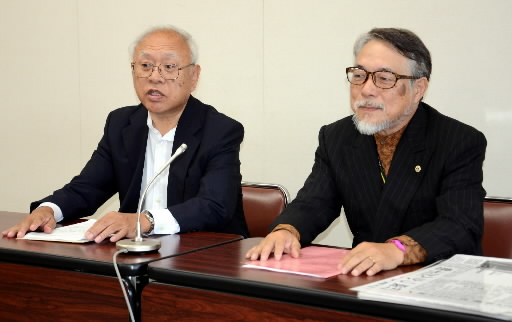 Two male survivors who were in their mothers’ wombs and exposed to the radiation of the atomic bombing in utero held a press conference at Hiroshima City Hall on October 25. They announced the establishment of a nationwide liaison organization of in-utero survivors of the atomic bombings in August of next year. As A-bomb survivors are aging, they would like to expand their networks to hand down their experiences to future generations.

The two survivors who held the press conference are Masahiro Mimura, 68, the head of the Association of Social Workers for Hibakusha and a resident of Nishi Ward; and Toshihiko Yoshii, 67, the chairman of the Kagawa Prefectural Atomic Bomb Sufferers’ Organization and a resident of Sakaide City, Kagawa Prefecture. They were once classmates at Nukushina Elementary School in Higashi Ward.

This summer, Mr. Yoshii read a newspaper article about Mr. Mimura, which indicated that he had obtained the A-bomb Survivors’ Certificate, and learned for the first time that he was also an in-utero survivor. They agreed to work together as the youngest survivors of the atomic bombing.

In preparation for next August, the pair will recruit members through newsletters of existing organizations of A-bomb survivors and other media. After the official launch of the organization, the members will write about their lives and the impact of the A-bombings. Other activities will be discussed among the membership.

As of the end of this past March, there were 7,396 in-utero survivors of the atomic bombings in Japan. The Mushroom Club, based in Hiroshima, is an organization composed of children with A-bomb microcephaly, a disorder caused by in-utero exposure to radiation, and their families. Microcephaly results in a smaller-sized head and impaired development. According to Mr. Mimura and Mr. Yoshii, while second-generation and third-generation organizations are increasing, this will be the first attempt to create a nationwide network of in-utero survivors.

The two men said, “The A-bomb survivors who have been engaged in peace activities for many years are dying one after another. There’s no time to lose. We would like to invite others to join us and start doing what we can.” For further information, call Mr. Mimura at 090-7375-1211.