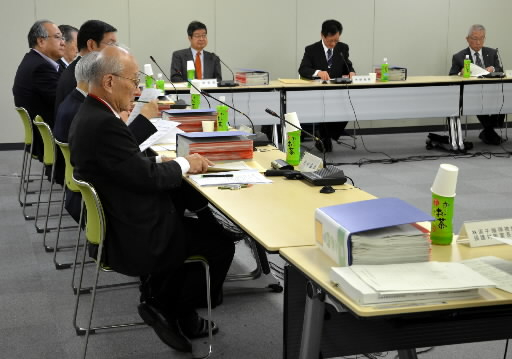 The review commission for the A-bomb disease certification system of the Ministry of Health, Labor and Welfare discussed the draft outline of its final report at an October 29 meeting at the ministry. The outline, which stresses the need to stipulate detailed separate certification standards for each illness, was criticized by committee members from the Japan Confederation of A- and H-Bomb Sufferers Organizations (Nihon Hidankyo). The draft outline was not finalized, but the commission chair, Naohiko Jinno, professor emeritus of public finance at the University of Tokyo, indicated that a draft of the final report would be issued at the group’s next meeting.

All 13 members of the commission attended its 24th meeting. Shigeru Takahashi, vice president of Hitotsubashi University, and other members stated that the draft outline offered an effective way to bridge the gap between government certification and judicial rulings. They expressed their support for the outline as a way to enhance the current system.

Meanwhile, commission member Terumi Tanaka, secretary-general of Hidankyo, which has advocated abolishing the current system in favor of creating a new allowance system, disputed this saying, “If it goes to court again, the government will lose.”

While the draft outline presents Hidankyo’s assertions, it also stresses the view that “liberalizing the scope of certification must be weighed heavily.” The government has repeatedly lost against class-action suits. In light of this, the commission’s recommendations focus on creating detailed certification standards for each disease based on the distance the person was from the hypocenter at the time of the bombing.

At the end of the meeting, Mr. Jinno indicated his intention to submit a draft of the final report based on the outline at the commission’s next meeting, which is scheduled to be held in November. There were no objections to this.

At a press conference following the meeting, Mr. Tanaka said, “I was shocked by the draft outline. In terms of stipulating standards for certification, it merely narrows down the diseases that qualify, making the standards worse rather than better.” He asked that Hidankyo’s opposing view be included in the final report.

In August Prime Minister Shinzo Abe directed the Health Ministry to prepare a final report by the end of the year. After receiving the report, the prime minister will decide what changes should be made to the system.

The draft outline of the final report presented by the special commission to review the system for the certification of A-bomb diseases is marked by language suggesting a reluctance to expand the scope of certification. The commission’s discussions, which began by examining how to eliminate the gap between certification and judicial rulings, focused on changes to the system to clarify the certification standards and brought it no closer to the basic solution sought by the Japan Confederation of A- and H-Bomb Sufferers Organizations (Nihon Hidankyo).

The draft outline’s introductory basic philosophy (general statement) was written from the perspective of “improving the current system” and “considering how to bridge the gap between judicial rulings and government certification.” But the explication that follows merely introduces the proposals and assertions of Hidankyo as one opinion.

Why did this discontinuity occur? With the exception of those from Hidankyo and those in the field of radiation protection, most of the commission members are experts in social security, economics and administrative law. They have stated that it is “necessary to distinguish between other harm resulting from the war and to gain the public’s understanding.” And with regard to the connection between radiation from the atomic bombings and illness (radiation-induced illness), the commission was forced to rely on a rationale based on current knowledge, thus leading to the discontinuity.

The debate by the commission, which was established in December 2010, has merely brought up the conflict about the usual assertions regarding the certification standards. Meanwhile the atomic-bomb survivors have gotten even older. Whether or not changes to the system can be made in line with the wishes of the survivors has been left to a political decision.

Basic philosophy
・Make changes to the current system in an effort to enhance it
・In view of the aging of the atomic bomb survivors, consider how to bridge the gap between judicial rulings and government certification