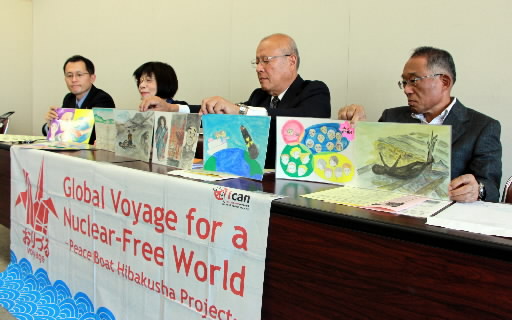 Three A-bomb survivors from Hiroshima Prefecture have returned from a voyage in which they conveyed their A-bomb accounts to the world. On October 29, they held a press conference at Hiroshima City Hall and said that they shared their wish for the abolition of nuclear weapons with people around the globe. The voyage was organized by Peace Boat, a Tokyo-based NGO.

Taking part were Tadashi Okamoto, 69, Hideki Takamura, 69, and Teruko Yahata, 76, all appointed “Special Communicators for a World without Nuclear Weapons” by the Japanese government. They left Yokohama Port on July 18, and visited a total of 19 nations, including El Salvador and France, in Latin America, Europe, and Asia, before arriving back in Japan on October 10.

Ms. Yahata, a resident of the town of Fuchu, met with survivors of the Holocaust at the former Auschwitz Concentration Camp in Poland. She keenly felt the importance of handing down their A-bomb experiences. “The number of people who are able to offer their accounts of the atomic bombings is declining each year,” she said. "It’s important to continue sharing our experiences.”

Mr. Okamoto, who lives in Asaminami Ward, said, “I told about the horror of the atomic bombing.” Mr. Takamura, a resident of Saeki Ward, added, “I hope more and more young people will convey the messages of the A-bomb survivors.”