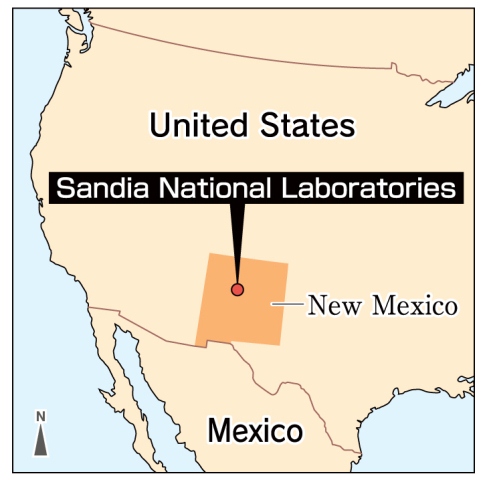 On October 30, it was revealed that the National Nuclear Security Administration (NNSA), an agency under the U.S. Department of Energy, conducted a nuclear test at the Sandia National Laboratories in New Mexico. This new type of test uses a special device, called a “Z Machine,” that generates powerful X-rays to check the performance of the U.S. nuclear arsenal.

The NNSA disclosed this information on its official website. The NNSA had announced that the most recent test before this was conducted on May 15. To date, the United States has carried out ten tests of this kind.

Just recently, on October 21, a joint statement on the humanitarian consequences and non-use of nuclear weapons was presented to the U.N. General Assembly First Committee, the body that deals with disarmament issues. The statement was supported by 125 nations, including Japan, the country which experienced the atomic bombings. The test will spark criticism from the international community against the Obama administration for continuing to perform tests to maintain its nuclear arsenal while calling for a world without nuclear weapons.

The first new-type test of nuclear weapons was conducted in November 2010 after President Obama took office. The test creates conditions of extreme temperature and pressure, close to that of a nuclear explosion, to explore the properties of plutonium, without employing test sites or explosives.

The NNSA has stated repeatedly that this testing is intended to maintain the safety, security, and effectiveness of the U.S. nuclear stockpile without underground nuclear testing.

In addition to these new-type tests, the United States, under the Obama administration, has also carried out four subcritical nuclear tests, which do not produce a nuclear explosion.

U.S. nuclear tests
Following its first successful nuclear test in July 1945, the United States pursued a series of atmospheric and underground nuclear tests until 1992, when it declared a moratorium on nuclear testing. Since 1997, the U.S. has repeatedly conducted subcritical tests, in which nuclear materials such as plutonium are jolted by the force produced from high chemical explosives. The United States contends that these tests are not prohibited by the Comprehensive Test Ban Treaty (CTBT) because they are not accompanied by a nuclear explosion. In recent years, the United States has been promoting research to test nuclear weapons in the laboratory in order to verify their performance.