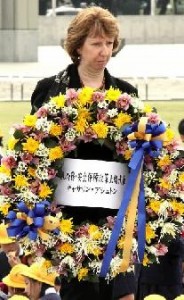 Catherine Ashton, the European Union’s High Representative for Foreign Affairs and Security Policy, visited Hiroshima on October 31. It was the first visit to Hiroshima by a person in charge of foreign policy for the EU. Ms. Ashton, 57, serves as the coordinator between Iran, which is proceeding with nuclear development, and six other countries, including the United States, Great Britain and France. She expressed strong determination with regard to nuclear disarmament, saying that it was their responsibility to ensure that the victims of the atomic bombings of Hiroshima and Nagasaki were the last.

After serving as a member of Britain’s upper parliamentary chamber, the House of Lords, Ms. Ashton was appointed to a key post in the EU. On October 31 she took a tour of the Peace Memorial Museum under the guidance of Kenji Shiga, the museum’s director, and then offered flowers at the memorial cenotaph.

After that she went to city hall where she met with Mayor Kazumi Matsui. Ms. Ashton said she was impressed by the museum and paid tribute to Hiroshima for continuing to deliver its important message. Meanwhile Mayor Matsui made a request of Ms. Ashton saying, “I hope you will keep the feelings of Hiroshima in mind in your diplomatic activities.” After making these public comments, the two held a private meeting.

According to the city’s International Affairs Department, the mayor explained the meaning of the inscription on the cenotaph: “Let all the souls here rest in peace for we shall not repeat the evil.” Ms. Ashton reportedly stressed her desire to cooperate with the Japanese government in the areas of security, disarmament and the economy.