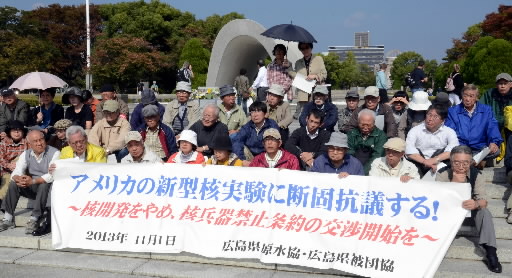 Protesting a nuclear test conducted by the United States on September 12, A-bomb survivors staged a sit-in in front of the Cenotaph for the A-bomb Victims in Hiroshima Peace Memorial Park on October 1. This public protest was organized by the Hiroshima Prefectural Confederation of A-bomb Sufferers Organization, chaired by Kazushi Kaneko, and the Hiroshima Council against Atomic and Hydrogen Bombs (Hiroshima Gensuikyo).

About 55 people, holding a banner to convey their strong objections, took part in the 30-minute sit-in, which began shortly after noon. In a speech, Nobuo Takahashi, 74, the director of Hiroshima Gensuikyo, criticized the United States, saying, "The United States is trying to intimidate the rest of the world by implying that it’s always ready to use nuclear weapons. Let’s send a message from Hiroshima to help realize a nuclear weapons convention.”

The participants adopted a resolution which calls on the United States to abandon its nuclear arsenal and the Japanese government to lodge a protest with the United States. The resolution has been faxed to President Barack Obama, Prime Minister Shinzo Abe, and Foreign Minister Fumio Kishida at the U.S. Embassy in Japan, the prime minister’s official residence, and the Ministry of Foreign Affairs of Japan, respectively.