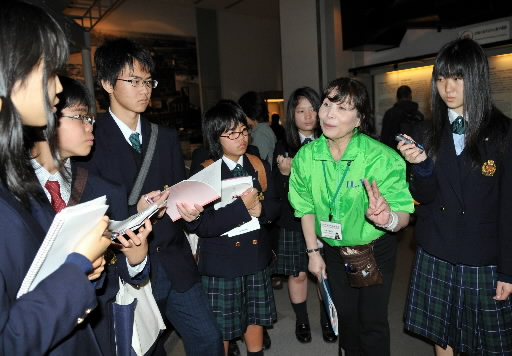 Eight members of the human rights club at Eishin Gakuen visited Hiroshima Peace Memorial Museum on November 2 and interviewed Chieko Kawashima, 68, a peace volunteer at the museum. By next spring, they plan to produce a booklet about her A-bomb experience and send copies to people who continue to suffer as a result of the accident at the nuclear power plant in Fukushima Prefecture. Following the Great East Japan Earthquake, students at this school in Fukuyama, Hiroshima Prefecture, have lent their support to the survivors and have had interactions with victims of the nuclear disaster.

During the interview, Ms. Kawashima said, “People said that no plants would grow in Hiroshima, but I felt encouraged by the canna flowers that bloomed after the bombing.” At the age of 23, she was forced to divorce her husband when his family learned that she was an A-bomb survivor. She then later remarried. Based on this experience, Ms. Kawashima said, “It’s important to keep moving forward.”

Ms. Kawashima’s experience, which was quoted in this year’s Peace Declaration on August 6, impressed the members of the club. They asked for an interview so they could convey her strength in battling back from prejudice. After taking careful notes at the interview, Mami Hakoda, 17, a high school junior, said, “I’m encouraged by the way she lived, never giving up hope.”