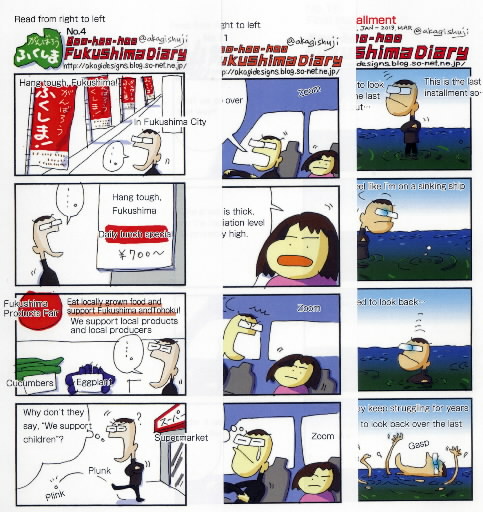 “Boo-hoo-hoo Fukushima Diary,” a series of four-panel cartoons and essays carried in the Chugoku Shimbun, has been translated into English. The English versions of the comic strips, which appeared monthly between January 2012 and March 2013, have been uploaded to the website of the Hiroshima Peace Media Center.

Through this comic strip, Shuji Akagi, 46, a high school art teacher living in the city of Fukushima, depicts the concerns of the people of Fukushima in the aftermath of the accident at the Fukushima No. 1 (Daiichi) nuclear power plant. The comic strip also looks at how Mr. Akagi and his wife handle raising their two daughters amid these conditions. Out of concern over the effects of the radiation leak from the power plant, their daughters, who are elementary school students, have been living with grandparents in the city of Aizu Wakamatsu in Fukushima Prefecture.

A total of 15 strips have been uploaded to the “Features” section of the website. The first one can be found at the following URL: https://www.hiroshimapeacemedia.jp/blog/mediacenter/article.php?story=20130122094100486_en