A-bombing and the Holocaust: Shared recognition of need to pass on experiences 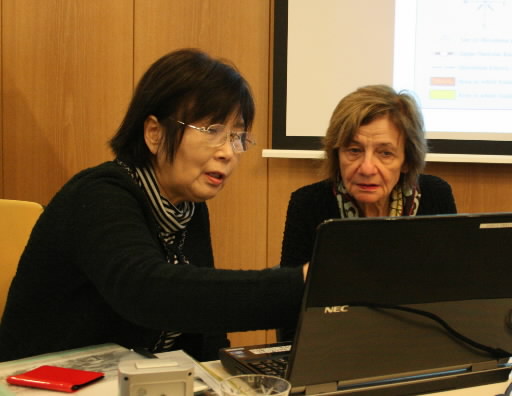 A Jewish writer whose parents survived the Holocaust made her first visit to Hiroshima on November 2 and 3 and met with an A-bomb survivor. Eva Hoffman, 68, and Keiko Ogura, 76, talked about conveying the stories of the atomic bombing and the Holocaust.

Ms. Ogura was 8 years old and in Ushita-cho (now part of Higashi Ward), 2.4 km from the hypocenter, at the time of the A-bombing. She described the situation at that time to Ms. Hoffman and explained that after the war many survivors refrained from discussing their experiences out of fear of discrimination in marriage or employment.

Just after the A-bombing, Ms. Ogura gave water to victims who begged her for it only to see them die. She was traumatized, believing that the water had caused their deaths. She did not tell anyone about the experience for 30 years and repeatedly had nightmares about it. But once she began recounting her A-bomb experiences to others, she stopped having the bad dreams.

In 2003, Ms. Ogura saw the B-29 bomber Enola Gay, the plane that dropped the atomic bomb on Hiroshima, on display at a facility of the Smithsonian National Air and Space Museum in the suburbs of Washington, D.C. Seeing the aircraft brought back vivid memories of her A-bombing experience as an 8-year-old, and she began sobbing. Her younger brother, who saw her crying on television, was surprised and told Ms. Ogura he was glad he no longer shared the same last name with his sister, who had married. “My brother doesn’t like to talk about the A-bombing,” Ms. Ogura said. “That’s the reality.”

Ms. Hoffman noted that survivors of the Holocaust have also lived with feelings of shame and guilt and don’t like to tell people about their experiences or discuss them with their children. She said she was impressed by Ms. Ogura’s spirit of forgiveness and determination to convey her story to the next generation and to the world.

Ms. Hoffman came to Japan at the invitation of Tsuda College in Tokyo. On her visit to Hiroshima she was accompanied by Atsuko Hayakawa, a professor at the college who translated "After Such Knowledge: A Meditation on the Aftermath of the Holocaust,” a book by Ms. Hoffman.

Eva Hoffman
Born in Krakow, Poland in 1945. Immigrated to Canada at the age of 13 with her family, who feared for their safety as a result of postwar anti-Semitism. Earned a Ph.D. from Harvard University. Worked at The New York Times from 1979-1990 including serving as senior editor of “The Book Review.” Published an autobiography based on her parents’ experience of the Holocaust in 1989. Has researched the collective history of Jews in Eastern Europe and written about what the Holocaust means to the children of the survivors. Resident of London.