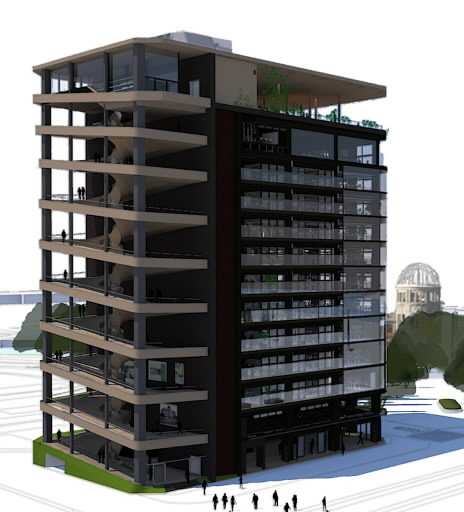 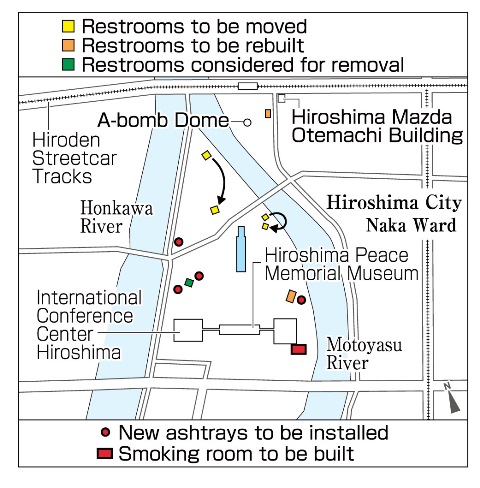 In preparation for the 70th anniversary of the atomic bombing in 2015, the Hiroshima Peace Memorial Park area in Naka Ward will undergo some changes. There are plans to renovate the office building owned by a Hiroshima-based company, located to the east of the A-bomb Dome, a World Heritage site. The building is expected to provide a new venue for peace studies and attract visitors. The City of Hiroshima will also create a smoking room in the park and replace old toilets with Western toilets. The setting of the park area will be reviewed with an eye toward making the park more comfortable for tourists.

Hiroshima Mazda, a car dealer based in Naka Ward, will renovate the 12-story Hiroshima Mazda Otemachi Building into a 14-story building, tentatively named “Hiroshima Peace Tower,” to create a space where tourists can relax and enable visitors from overseas to view the beautiful cityscape.

The first floor will be used to offer local products, and the third to the eleventh floors will be tenant offices. On the east side of the building, spiral stairs will be installed to exhibit panels of the history of Hiroshima. The 12th floor will be open to the public as a conference space to be used for peace studies. There will be a terrace on the 13th floor, which commands a view of the A-Bomb Dome and Peace Park.

The City of Hiroshima will also renovate the smoking areas and toilets in the park. In order to prevent the effects of passive smoke, the park’s existing five ashtrays will be removed, and by the time of the Peace Memorial Ceremony next August 6, four of them will be relocated to places where cigarette smoke can more easily be contained. A smoking room will also be created at one corner of the parking lot to the south of Peace Memorial Museum.

The restroom facilities at five locations in the park will be rebuilt or relocated. Most of the Japanese-style toilets will be replaced with Western toilets, which are more comfortable for visitors from overseas. In order to bring down maintenance costs, the number of restroom facilities will be reduced to four. The city is aiming to complete these renovations within fiscal 2016.

The city’s Greenery Promotion Department says that the design of ashtrays and toilets will conform to the surroundings of the sacred place.