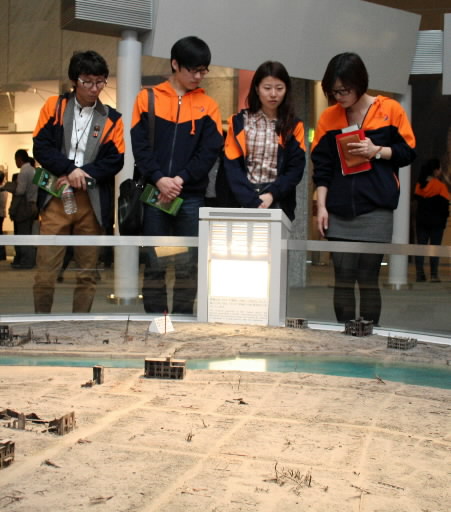 On November 8, 20 university students, originally from North Korea, visited Hiroshima Peace Memorial Park and learned about the damage wrought by the atomic bomb. These students all fled North Korea, due to food shortages or political reasons, and are now living in South Korea.

The group first offered a silent prayer in front of the Monument in Memory of the Korean Victims of the A-bomb, then toured Hiroshima Peace Memorial Museum. Yu I, 22, who left North Korea with her mother and older sister in 2008, while her father remains in North Korea, said, “My heart aches, as I have learned that the atomic bomb ripped apart many families.”

Kim Chaewon, 32, who left North Korea in 2006, stressed, “The younger generations of Asia should join hands and appeal for the abolition of nuclear weapons.” That day, they also met with Hiroshima Mayor Kazumi Matsui at city hall, and listened to the account of an A-bomb survivor.