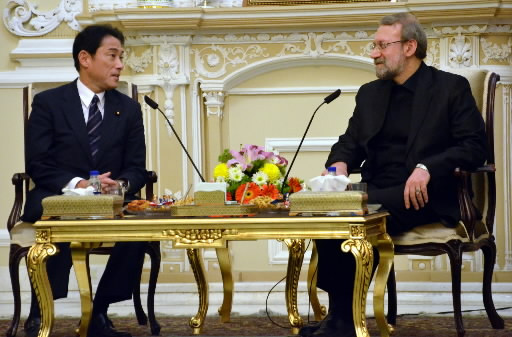 The meeting was held at the Presidential Office. To gain the trust of the international community, Mr. Kishida stressed the need for Iran to ratify the CTBT and implement the additional protocol which would enable the International Atomic Energy Agency (IAEA) to conduct no-notice inspections. He encouraged Mr. Rouhani to pursue a flexible response.

Over 160 nations have already ratified the CTBT. For the treaty to take effect, all nations which possess nuclear reactors, both for conducting research and for generating electricity, must ratify it. However, eight nations, including the United States and Iran, have not. With the Rouhani administration showing a proactive stance to bring his nation’s nuclear concerns to an early resolution, the Japanese government is urging Iran to ratify the treaty through patient bilateral negotiations.

Concerns over North Korea were also discussed at the meeting. Mr. Kishida called on Iran to recognize the threat posed by North Korea’s nuclear and missile development programs. President Rouhani and Foreign Minister Kishida agreed to promote cooperation in such undertakings as water resource management in the environmental field, humanitarian assistance in the event of earthquakes, and measures to curb drug trafficking at national borders.

Prior to his meeting with Mr. Rouhani, Mr. Kishida met with Ali Larijani, the chairman of Iran’s parliament, who is known as a hard-line conservative. Mr. Kishida asked the chairman several questions, including the response in Iran toward the six-nation talks proceeding in Geneva, Switzerland which involve discussions with the United States and European nations over nuclear issues.

Mr. Kishida arrived in Tehran on the morning of November 9. Initially, he had planned to meet with Iranian Foreign Minister Mohammad Javad Zarif that afternoon. However, Mr. Zarif, who was taking part in discussions in Geneva, returned later than anticipated. Their meeting was then changed to the afternoon of November 10 (the evening of November 10 in Japan).

It is the first time in four and a half years that a Japanese foreign minister has paid a visit to Iran. The Japanese government views this visit as an opportunity to lend support to negotiations at the six-nation talks.