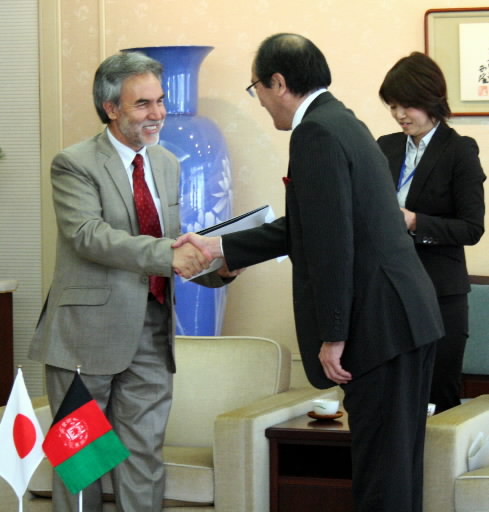 On November 12, nine government officials from Afghanistan, where efforts to recover from that nation’s civil war continue, visited Hiroshima Mayor Kazumi Matsui at Hiroshima City Hall. These officials are now attending a training program at the Hiroshima Office of the United Nations Institute for Training and Research (UNITAR) that has been designed to develop human resources who will lead the reconstruction efforts in the affected areas. They showed keen interest in the reconstruction process of the A-bombed city of Hiroshima.

In all, 72 Afghan government officials are taking part in this training program through November 15, and nine of them, on behalf of the others, visited Mr. Matsui. Gul Saleh, 57, the project manager of Afghanistan’s office of Infrastructure, Engineering and Energy, which is in charge of the restoration efforts involving Afghan infrastructure, including electricity and the water supply, expressed his enthusiasm for this work. He said that he would spread Hiroshima’s message in his country and seek to make swift progress in Afghanistan’s reconstruction. Mr. Matsui offered encouragement, urging them to exercise leadership with the determination to pursue peace.

The City of Hiroshima and Hiroshima Prefecture shoulder part of the operating costs of the UNITAR Hiroshima Office, which opened in 2003. The organization has invited those engaged in Afghan reconstruction efforts to Hiroshima every year since its establishment, and conducts its training program based partly on the reconstruction process of Hiroshima, the city which recovered from the damage wrought by the atomic bombing. A total of roughly 420 people have attended the program to date, including the participants in the current training.