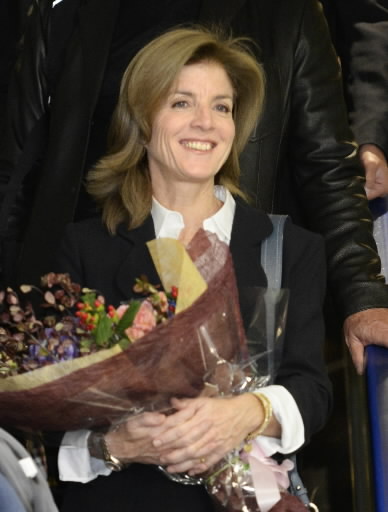 On November 15, the new U.S. Ambassador to Japan, Caroline Kennedy, 55, arrived at Narita Airport on a civilian carrier. At the airport, Ms. Kennedy said she feels honored to serve as ambassador. “It’s a special honor for me to be able to work toward strengthening ties between our two great nations,” she said, expressing her enthusiasm for the role.

Ms. Kennedy appeared at the press conference in a black suit, accompanied by her husband, a designer. Extending her arms in greeting, she smiled and said, “Hajimemashite,” the Japanese expression for “It’s nice to meet you.”

She recounted an episode involving her father, the late President John F. Kennedy, assassinated in 1963, who had shared the unfulfilled wish to visit Japan while in office. “I’m also proud to carry forward my father’s legacy of public service,” she said.

Ms. Kennedy is the first woman to serve as U.S. ambassador to Japan. Though lacking experience in diplomacy and foreign affairs, she will face a number of challenging issues, including the relocation of the Futenma Air Station in Okinawa and negotiations on the Trans-Pacific Strategic Economic Partnership Agreement (TPP).

Eyes are on her ability to address these issues, bolstered by her name recognition and President Barack Obama’s strong trust.

Ms. Kennedy is scheduled to present her credentials from President Obama to Emperor Akihito at the Imperial Palace on November 19 to mark the formal start of her duties. After that, she will meet with Prime Minister Shinzo Abe and Foreign Minister Fumio Kishida. Her children will reportedly join her in a few weeks.

In September, Ms. Kennedy said that she was deeply affected by her visit to Hiroshima during her first visit to Japan in 1978. In a YouTube video released on November 13, she says that her experience of Hiroshima left her with a profound desire to make efforts for a more peaceful world.