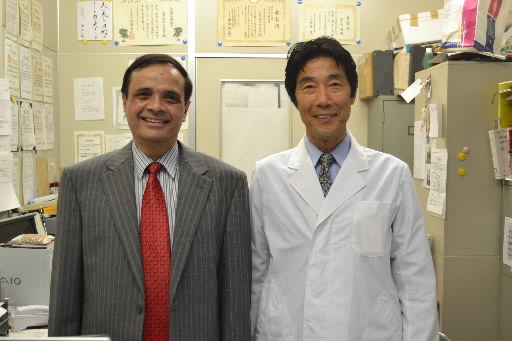 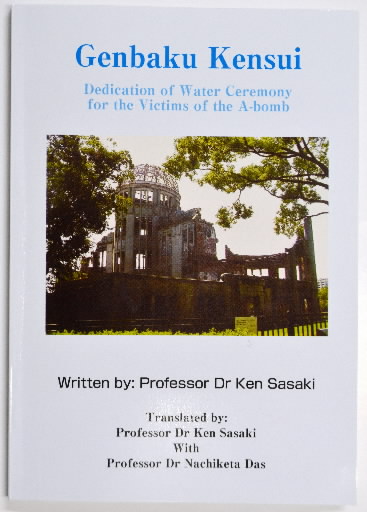 An English translation of a book on the water offered to the Cenotaph for the A-bomb Victims during the Peace Memorial Ceremony in Hiroshima every August 6 has been published. The original Japanese book, which analyzes the water quality, was published in 2010 by the Hiroshima Palatable Good Water Research Group led by Ken Sasaki, 64, a professor at Hiroshima Kokusai Gakuin University (HKGU). Professor Sasaki, the author of the book, revised the original text and translated it into English. Professor Nachiketa Das, Dean of the School of Earth Sciences at Ravenshaw University in India, who is also a visiting professor at HKGU, supervised the contents.

The 141-page book of A-5 size contains the results of water quality surveys that have been conducted each year since 1988 at about 20 locations, including the famed water from the Mitaki district of Nishi Ward. The book also describes the activities of Toshie Une, who offered water to monuments for A-bomb victims for more than half a century. (Ms. Une died at the age of 93 in 2012.) The English version contains water quality data obtained after the publication of the original Japanese version. For non-Japanese readers, the English version has more photos of Hiroshima and the damage caused by the atomic bomb. The book will also be published in India soon.

Professor Sasaki said, “Studying the history of offering water to the Cenotaph for the A-bomb Victims and examining the water quality will lead to respect for peace and environmental conservation. I hope this information will become widely known to non-Japanese people as well.”

Five hundred copies have been printed, priced at 500 yen per copy. The book can be obtained by contacting Professor Sasaki at sasaki@hkg.ac.jp.