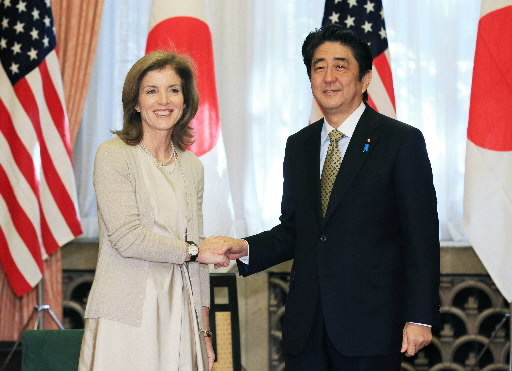 On November 20, Foreign Minister Fumio Kishida, elected from district one in Hiroshima, met with the new U.S. Ambassador to Japan, Caroline Kennedy, at the Ministry of Foreign Affairs. The Ministry announced on the same day that ties between the United States and Japan have been confirmed and that the two nations will continue to strengthen their alliance and work together to promote nuclear disarmament in seeking a world without nuclear weapons.

At the meeting, Mr. Kishida, as a foreign minister elected from an A-bombed city, expressed his firm determination to promote nuclear disarmament. Ms. Kennedy said that nuclear disarmament is also a high priority for U.S. President Barack Obama.

The ambassador went on to tell Mr. Kishida about her visit to Hiroshima during a trip to Japan in 1978. She said that U.S. support for the Partial Nuclear Test Ban Treaty in 1963, signed by her father, who was then president, was one of his greatest achievements.

After the closed-door meeting, Mr. Kishida told the media that they did not yet discuss a visit by Ms. Kennedy to Hiroshima.

Prior to this meeting, Prime Minister Shinzo Abe met Ms. Kennedy at his official residence and the two agreed that they will work together to address pending issues, such as negotiations involving the Trans-Pacific Strategic Economic Partnership Agreement (TPP), and security issues, which include the relocation of the U.S. Air Station Futenma, currently located in Ginowan City in Okinawa Prefecture; North Korea’s nuclear and missile development program; and China’s military buildup and expanding maritime influence.

They also exchanged views on U.S. and Japanese policies concerning women and confirmed that the two countries will collaborate in lending support to the Philippines, which was hit hard by a recent typhoon. After their meeting, Mr. Abe said at the Upper House’s special committee on national security that he was assured that Ms. Kennedy fully recognizes the importance of the U.S.-Japan alliance and that she will be an excellent ambassador.