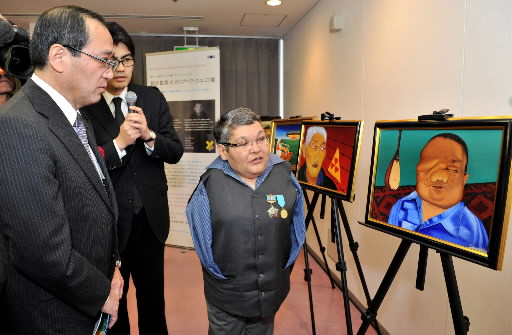 Karipbek Kuyukov, 45, an artist from Kazakhstan, held his first exhibition in Hiroshima on November 20 at the International Conference Center Hiroshima in Naka Ward. Mr. Kuyukov was born without arms due to the effects of the nuclear tests that were repeatedly carried out by the former Soviet Union in Kazakhstan. His one-day exhibit showcased 17 paintings he created with his mouth and his feet to denounce nuclear testing. Since his first visit to Hiroshima 23 years ago, when he took part in the World Conference Against Atomic and Hydrogen Bombs, he has wanted to build a bridge between the two locations that have suffered nuclear damage. With this exhibition, he realized his wish.

In one painting, a grim mushroom cloud rises in the sky with a mother and child on the wide grassland below. Their faces reveal their horror of nuclear weapons. There are also smaller paintings of lakes and mountains which Mr. Kuyukov made with the idea of protecting nature.

Mr. Kuyukov was born in a village near the Semipalatinsk nuclear test site, the largest such test site maintained by the former Soviet Union. With his elder brother and sister dying within a year after their births, it is believed that his parents were gravely affected by the nuclear tests. He explained his work to Hiroshima Mayor Kazumi Matsui and to a special envoy from the Ministry of Foreign Affairs of Kazakhstan, who came for the opening of the exhibit.

On the day before, when he arrived in Hiroshima, he listened to the A-bomb account of Toshiko Tanaka, 75, an A-bomb survivor who lives in Higashi Ward. She told him about suffering terrible burns that nearly ended her life. Mr.Kuyukov commented, “As victims of nuclear tests, we share the pain of the A-bomb survivors. I would like to work together with the people of Hiroshima to call for a world without nuclear weapons.”

The exhibition was organized by a Tokyo-based NPO and supported by the Ministry of Foreign Affairs of Kazakhstan.