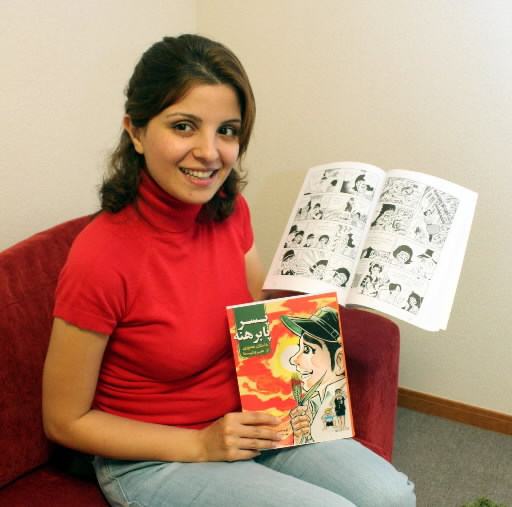 “Barefoot Gen” a manga that tells the story of a hardy young boy’s life in postwar Hiroshima, has been translated into Persian by Sara Abedini, 29, by an Iranian resident of Higashi Hiroshima. Initial press runs of 500 copies of the first two volumes were made through this past summer. “I believe that the story of Gen, who overcame great hardships, will give hope to the young people of Iran,” the translator said.

Dr. Abedini, a dentist, came to Japan in 2007 along with her husband so he could pursue studies here. She also undertook studies at Hiroshima University’s graduate school and earned a doctorate in orthodontics last year.

“Barefoot Gen” is the most famous work by Keiji Nakazawa, a manga artist who died last December. Dr. Abedini first encountered the manga in the summer of 2009, when she was a graduate student. After learning that a volunteer group was seeking foreign students to help with translations of “Gen” into various languages, she first saw the English version. Although she knew about the A-bombings of Hiroshima and Nagasaki, she was overwhelmed by the realistic depictions in the manga.

Over a period of a year and a half, in between her studies, Dr. Abedini translated the first four volumes into Persian from the English version, referring to the original Japanese to check the nuances of some expressions. In order to get approval for publication in Iran, she asked a relative who is a graphic designer to draw over some of the artwork in which too much women’s skin was revealed. She communicated with the publisher in Iran and was ultimately able to get the translation published, using some of her own money for the project.

According to Dr. Abedini, comic books are not common in Iran and not many people have read her translation so far, but she has heard from some of those who have. One said the story was sad but made him think about the meaning of peace while another said she was looking forward to reading the next volume.

“For the younger generation of Iranians like me, Japan has as image as an affluent nation,” Dr. Abedini said. “I hope learning about the sorrow Japanese people experienced and how they rebuilt their country will motivate young Iranians to make our nation prosperous.”