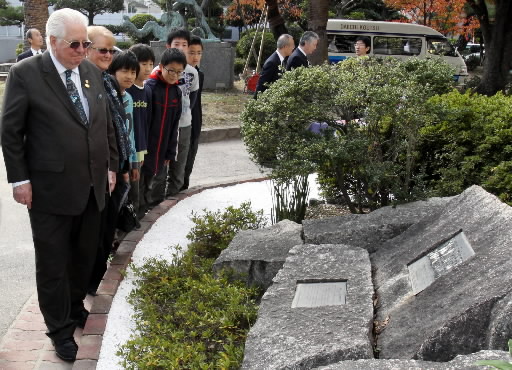 Destroyed in A-bombing and rebuilt with help of Australian forces

The Australian president of Lions Clubs International has paid a visit to a local elementary school that was destroyed by fire in the atomic bombing and rebuilt with the support of the Australian army. Barry Palmer, 71, visited Senda Elementary School in Hiroshima’s Naka Ward on November 22.

Hidenori Shono, 56, the school’s principal, and eight student representatives welcomed Mr. Palmer and took him to see a monument to friendly relations between Japan and Australia that was erected on the school grounds. Mr. Palmer also heard about the school’s reconstruction which took place after Australian occupying forces, moved by the sight of children studying outdoors, provided materials to rebuild the school. Several classrooms were completed in 1947.

Mr. Palmer said he hoped that the good relations between Japan and Australia would be continued through people-to-people exchanges.

This was the first official visit to Japan by Mr. Palmer, who assumed his post in July, and his first trip to Hiroshima. In addition to his visit to the school, he was given a guided tour of the Peace Memorial Museum by its director, Kenji Shiga. Mr. Palmer said the devastation that resulted from the atomic bombing was worse than he had imagined and that a serious effort must be made to bring about the abolition of nuclear weapons.