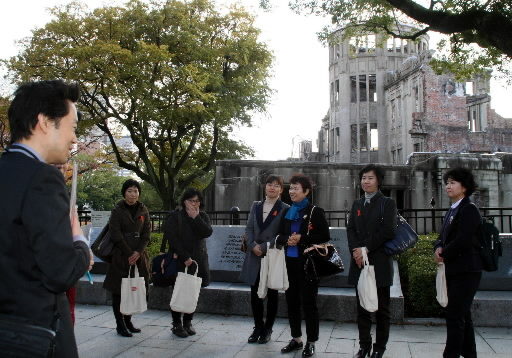 On November 25, six South Korean nurses, now visiting Hiroshima, began a training program on medical care for A-bomb survivors. They are in Japan at the invitation of the Hiroshima International Council for Health Care of the Radiation-exposed (HICARE), which is run by Hiroshima Prefecture, the City of Hiroshima, and other entities.

The nurses are all women, ages 34 to 56, who work for hospitals in Seoul and Busan. On the first day of the training, they visited the Atomic Bomb Dome and the Monument in Memory of the Korean Victims of the A-bomb in downtown Hiroshima. Remaining in the city until November 29, they will learn about current medical practices for A-bomb survivors at the Hiroshima Red Cross Hospital & Atomic Bomb Survivors Hospital from doctors involved in their medical care. They are also scheduled to visit Kurakake Nozomi-en, a special nursing home for A-bomb survivors located in Asakita Ward.

Lee Ranju, 52, a member of the team in charge of medical checkups for A-bomb survivors at the Busan Veterans Hospital, said, “In South Korea, too, A-bomb survivors are aging. More and more people need us to drive them back and forth to the hospital in order to receive health checkups. I’d also like to learn about caring for the emotional and spiritual needs of the survivors.”