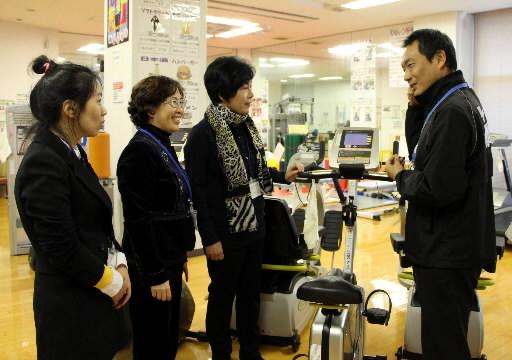 On November 25, three staff members from the A-bomb Sufferers Welfare Center in Hapcheon County, South Gyeongsang Province, known as “Hiroshima in Korea” due to its large population of A-bomb survivors, came to Hiroshima to learn about relief measures for survivors.

Lee Hwasuk, 32, a welfare counselor, said, “Korean A-bomb survivors are also aging. We would like to see what we can do to address this situation, working together with people in Hiroshima.” Kim Gyeongsuk, 52, a care worker, and Lee Gyeonja, 53, a cook, said that they hoped to make good use of their experiences here to support A-bomb survivors after returning to South Korea.

The Hapcheon A-bomb Sufferers Welfare Center, where 107 A-bomb survivors now reside, was established in 1996 with financial aid provided by the Japanese government. The three staff members will remain in Hiroshima until November 29. They will tour Hiroshima Peace Memorial Museum and exchange views with staff members at three special nursing facilities for A-bomb survivors in Hiroshima.