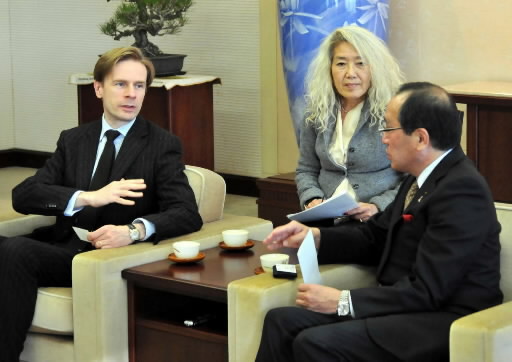 On November 26, Charles-Henri Brosseau, 44, the French consul general residing in Kyoto, visited Hiroshima for the first time after assuming his post. He met with Hiroshima Mayor Kazumi Matsui at Hiroshima City Hall and called for cities in France to join Mayors for Peace to help expand the organization. Mayors for Peace is an international network which appeals for the abolition of nuclear weapons.

Mr. Brosseau assumed the position of consul general in September after serving in such posts as deputy director for South-East Asia of the Asia Oceania Directorate of the French Ministry of Foreign and European Affairs. He came to Hiroshima to attend an event sponsored by the Centre Culturel Franco-Japonais De Hiroshima.

Mr. Matsui, who serves as the president of Mayors for Peace, offered his thanks for the 146 French cities that are currently members of the organization. The mayor handed Mr. Brosseau a French translation of this year’s Peace Declaration, which the mayor read out at the Peace Memorial Ceremony on August 6. “I hope that you will share my thoughts with others,” Mr. Matsui said.

They also talked about the Hiroshima version of The Michelin Guide, published in May, one of a series of guides on restaurants and hotels that originated in France. Mr. Bronsseau said that he would like to deepen French ties with Hiroshima in the fields of industry and commerce.