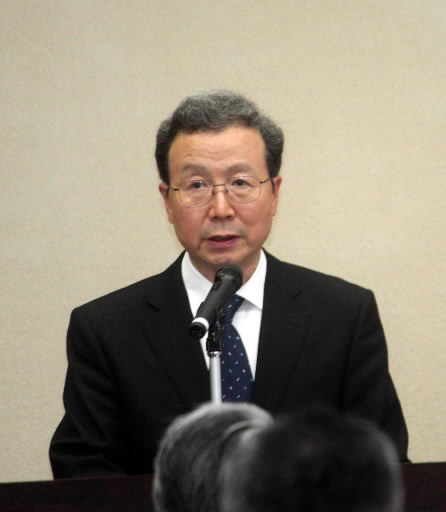 On November 26, Cheng Yonghua, the Chinese ambassador to Japan, spoke to students at Hiroshima University in Higashihiroshima. He said that China and Japan must improve their relations through dialogue and stressed that the two nations should become driving forces for progress in Asia and in the world. The ambassador also paid a visit to Peace Memorial Park and Peace Memorial Museum in downtown Hiroshima.

About 150 people, including Chinese students and faculty members of the university, listened to Mr. Cheng speak. Touching on China’s recent establishment of an air defense zone over the East China Sea, which includes the Senkaku Islands (known in China as the Diaoyu Islands), the ambassador reiterated his position that this action does not target any particular nation. He also said that it has no effect on the freedom of civilian flights.

Regarding relations between the two countries, Mr. Cheng acknowledged that ties are currently strained and this had led to some negative repercussions. He cited the controversy surrounding the Senkaku Islands as an example, and said that both nations must seek a peaceful resolution. He also called for further exchange and dialogue between Chinese and Japanese students.

At Peace Memorial Park, the ambassador offered a silent prayer at the Cenotaph for the A-bomb Victims. At Peace Memorial Museum, he gazed at the items on display, including panels which depict nuclear weapons in the world today and the damage that has been wrought by radiation. Mr. Cheng said that he has made many visits to the museum and every time his heart aches. Efforts must be made for peace, he said, so that the tragedies of the past will not be repeated.