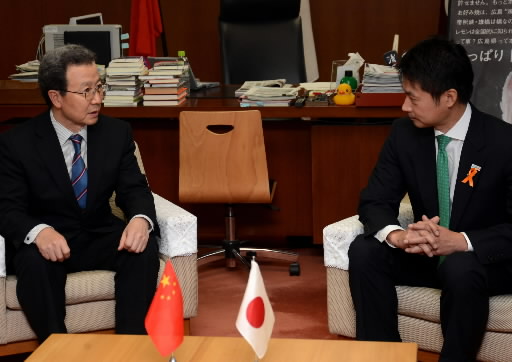 Details of timing not discussed

Cheng Yonghua, Chinese ambassador to Japan, has responded favorably to an invitation by the governor of Hiroshima Prefecture to attend the August 6 Peace Memorial Ceremony in Hiroshima. The ambassador met with Gov. Hidehiko Yuzaki in the prefectural offices on November 27 and indicated that he would try to arrange his schedule so as to be able to attend the ceremony but made no mention of whether that would be next year or some year in the future.

Every year the City of Hiroshima sends invitations to the Peace Memorial Ceremony to all ambassadors to Japan. China is the only one of the five nuclear powers whose ambassador has never attended. The Chinese consul-general in Osaka did attend the ceremony in 2008, however.

With regard to the deteriorating relations between Japan and China, Mr. Cheng said, “If we cooperate, it will benefit both sides. If we quarrel, both sides will get hurt. We must work toward building a better relationship in the future.”