Ambassador Kennedy delivers speech in Tokyo: Talks of need to create an “even stronger” alliance 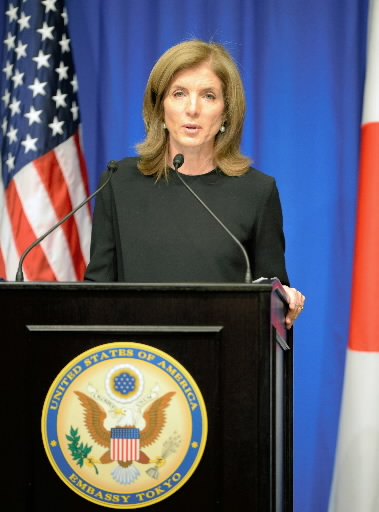 Caroline Kennedy, U.S. ambassador to Japan, gave a speech at a welcome luncheon held in her honor on November 27. The 20-minute speech was the ambassador’s first since taking up her post. About 600 members of the America-Japan Society, which promotes friendship between the two nations, and the American Chamber of Commerce in Japan attended the event, which was held at a Tokyo hotel.

In her speech Ms. Kennedy referred to efforts that have been made over the years to build a strong alliance between the U.S. and Japan and said, “Now it's our turn to continue this work so that we can pass this alliance on to our children even stronger than it is now.”

She also mentioned her 1978 visit to Hiroshima with her uncle, Sen. Edward Kennedy. “We went to a Hiroshima hospital and spoke with women who had been burned in the attack,” the ambassador said. “We laid a wreath to honor the past, but my uncle also talked about the future we could build together.”

Ambassador Kennedy talked about the partnership between the U.S. and Japan, citing the delivery of supplies by the U.S. military and Japan’s Self-Defense Forces to communities in the Philippines that were devastated by the recent typhoon. She also expressed U.S. support for the creation of a new national security policy by Japan, including the establishment of a Japanese version of the U.S. National Security Council, which was approved by the Diet on November 27.

She also said China’s announcement of an “air defense identification zone” over the East China Sea, including the Senkaku Islands, and similar actions “undermine security.”