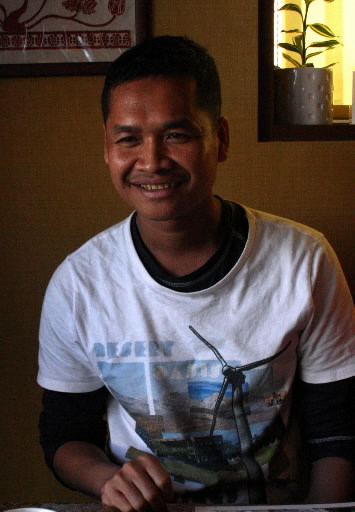 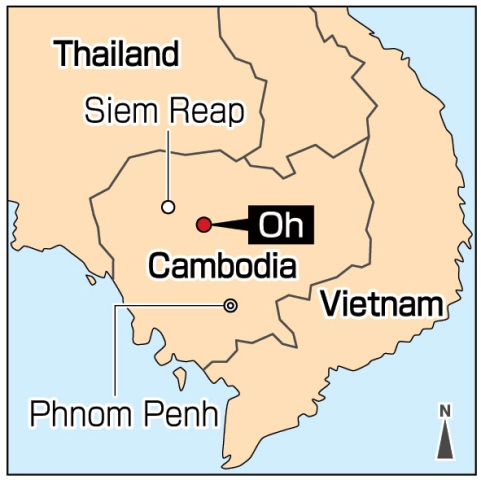 Ry Saroeun, a Cambodian resident of Hiroshima, served as a child soldier in his homeland and fought against Pol Pot’s forces. “Only 10 or 15 of the 50 members of my class survived,” he said, “and we missed out on an education.” Mr. Ry, 35, now manages a Cambodian restaurant in Hiroshima’s Minami Ward.

Mr. Ry was born in the village of Oh, about 60 km southeast of Siem Reap. From 1987 through 1993 when guerrilla warfare was particularly intense, fifth- and sixth-graders were forced to serve in the army during the administration of Heng Samrin. Mr. Ry joined the army as a fifth-grader. “A teacher told me to get in a truck, and I was taken to the combat area,” Mr. Ry said. “If I hadn’t gone, my parents would have been killed. The teacher told me I could get a medal if I fought hard, so I did.”

For three years Mr. Ry’s unit pursued Pol Pot forces that were hiding out in the jungles of northwest Cambodia. “At night we laid land mines around us to protect ourselves as we slept,” Mr. Ry said. His hands and feet bear scars from mines and rockets. “But if Pol Pot’s forces had known we were Cambodian, they would have saved us,” he said.

In the jungle some of Mr. Ry’s fellow child soldiers contracted malaria and died or became ill from drinking foul water. Those who got sick and were left behind were liable to be attacked by tigers, so they would ask their comrades to kill them instead, he said.

After their defeat by Pol Pot’s forces, Mr. Ry and 14 others wandered in the jungle. Elderly women who supported Pol Pot brought them food, he said. Gradually Mr. Ry and his friends became separated. Fearing he would be pressed into service again if he returned to his village, Mr. Ry headed for Siem Reap.

He went to a Buddhist temple there and became a monk. He also studied English while at the temple. After about three years, he gave up the priesthood, got a job and saved up enough money to buy a motorbike. Then in 1998 he returned home. “My family thought I was dead and had held a funeral for me,” he said. “My mother was shocked and thought I was a ghost.”

As one who had experienced the nation’s civil strife, Mr. Ry wanted to convey the history of Cambodia to young people and foreigners, so he later became a guide in Siem Reap. He also learned to speak Japanese.

Mr. Ry came to Japan in 2010 after his marriage to Aya Kagiyama, 34, who was dispatched to Cambodia with the Japan Overseas Cooperation Volunteers. His memories of the civil strife in Cambodia remain vivid, and he can’t bear to watch television programs on the atomic bombing because he recalls the smell of dead bodies and the warmth of blood.

In addition to telling people in Hiroshima about Cambodia and his experiences, Mr. Ry hopes Cambodians who study at Hiroshima University and other local institutions will put what they have learned in this democracy to use to change their homeland.

Cambodian Civil War
In 1970, the pro-American Lon Nol led a military coup against Prince Norodom Sihanouk and established the Khmer Republic. A civil war between the government and the Khmer Rouge led by Pol Pot, a Communist revolutionary, ensued, and in 1975 Khmer Rouge forces overthrew Lon Nol and established Democratic Kampuchea. Under Pol Pot, numerous political crimes were committed, including torture and the forced removal of citizens from cities to the countryside, where they were forced to become agricultural workers. Pol Pot’s regime was toppled in 1979 after Vietnam invaded Cambodia, and Heng Samrin was installed as president. Civil strife between Heng Samrin’s regime and Pol Pot’s forces and two other anti-Vietnam factions subsequently broke out. In October 1991 the Paris Conference convened to sign a comprehensive political settlement of the Cambodia conflict, but hostilities reportedly continued for some time thereafter.