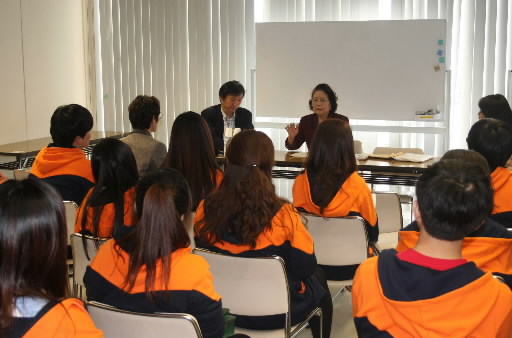 In 2013, the Korea Future Foundation, a private organization in South Korea, made Hiroshima the overseas location for its biannual training program to develop human resources. This was the first time Hiroshima was selected as the site for the group’s training overseas. The program is designed for North Korean college students who fled North Korea and are now living in South Korea. A visit to Hiroshima this past November by 20 North Korean students was the second such visit, following a group of 19 North Korean students who came to the city in June. Those connected to the program who had felt that Hiroshima was “the most suitable place to learn about peace, a prerequisite for the unification of the Korean Peninsula,” reportedly encouraged the organization to choose Hiroshima as the training site.

The 20 North Korean students are attending this year’s second term of the organization’s Inter-Korea Unification Leadership Training Program, designed to develop human resources. The program was launched in 2011 with the hope that young people from North Korea, who are familiar with both Koreas, can serve as a bridge for unification. The six-month course involves overseas training and, previously, Thailand, Vietnam, and the city of Osaka were selected as overseas sites.

But partly based on a recommendation from Kim Mikyoung, 49, an advisor to the organization and an associate professor in the Hiroshima Peace Institute at Hiroshima City University, the 19 participants in the first term of the 2013 program made the maiden visit to Hiroshima. They learned about the reality of the atomic bombing by visiting Hiroshima Peace Memorial Park and attending a lecture by Ms. Kim.

Explaining why its trainees came to Hiroshima for the second term, too, Mr. Gu said, “We conducted a questionnaire with the past participants in order to determine the training site for the second term. And the largest number of people said that Hiroshima is the most suitable place.” He added, “When we think about the unification of the peninsula, we also can’t ignore the nuclear issue in the North. The results of the questionnaire are also in line with our wish that the students learn about the horrors of nuclear weapons.”

Toward this end, the organization made time in the second term for the students to listen directly to the A-bomb account from a survivor, in addition to their visit to Peace Memorial Park. Kim Jia (an alias), 32, who fled North Korea in 2009, said, “At Hiroshima Peace Memorial Museum, the images of the people who were so badly burned have been etched into my mind. The vivid descriptions of the atomic bombing, like the story about people not even being able to receive treatment for their wounds, also left a strong impression.”

Lee Miso (an alias), 22, who also fled North Korea in 2009, said, “The story where an A-bomb survivor’s friend was desperately pleading for help, but died because of the effects of radiation, had a strong impact on me.” She linked the life-or-death experiences of the A-bomb survivors to her own ordeal at the time she fled North Korea.

Political relations between Japan and South Korea are far from favorable. However, declared Mr. Gu, “If the students believe that holding the training in Hiroshima is useful, then we will continue to consider Hiroshima as a training site for the program.”