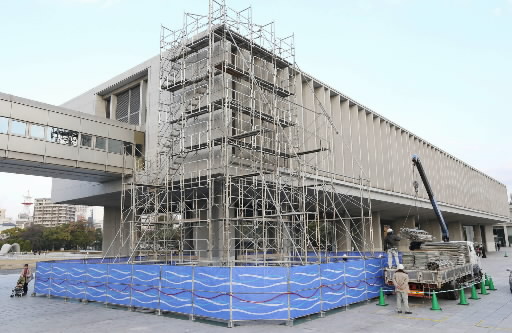 The City of Hiroshima has begun a preliminary study for the seismic retrofitting of the main building of Hiroshima Peace Memorial Museum, work that is scheduled to start in fiscal 2016. Samples to evaluate the strength of the building will be collected by cutting into the structure’s concrete columns. This will be the first time that such holes are made in the main building, which opened in 1955 and has been designated one of Japan’s important cultural properties. On December 3, scaffolding was erected around a part of the west side of the building. Based on the data obtained through an examination of these samples, the most suitable method for quakeproofing the building will be determined by the end of this fiscal year.

The Japanese Association for Conservation of Architectural Monuments, a public interest incorporated foundation based in Tokyo, has been entrusted by the City of Hiroshima to obtain the samples between mid-December and the end of next January. The cylindrical samples will be eight centimeters in diameter and 20 centimeters in length. A total of nine samples will be taken from among the 20 columns that support the main building and from the underground foundation. The holes will be filled with concrete.

An analysis of the samples will be performed to assess the level of deterioration and strength. Based on these results, the city government will decide the best approach to use for the seismic retrofitting work, which will be carried out during fiscal 2016 and 2017. The decision has already been made to install seismic isolation rubber in the underground foundation.

The museum’s main building was designed by world-renowned architect Kenzo Tange (1913-2005) and was designated an important cultural property in 2006. According to a city government official, it is the first time that a concrete structure of national importance will undergo a seismic retrofitting, and the City of Hiroshima and Japan’s Agency for Cultural Affairs have held rigorous discussions over the methodology to be used, resulting in a one-year delay in the start of the project. The city’s Peace Promotion Division commented that decisions involving how to perform the work are being made carefully because safety must be guaranteed without altering the exterior of the building.