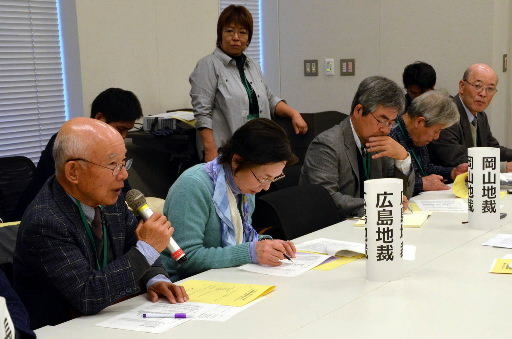 On December 3, a nationwide group of plaintiffs was formed by A-bomb survivors who have filed lawsuits over the A-bomb disease certification system after their applications were turned down despite the relaxation of the certification criteria in 2008. They said that continuing to win lawsuits will lead to a revision of the certification system so that it more effectively addresses the actual conditions of A-bomb survivors, and they resolved to be united and generate momentum to realize the overhaul of the system.

The group is made up of 108 plaintiffs who have filed lawsuits at the seven district courts in Hiroshima, Okayama, Nagasaki, Tokyo, Nagoya, Osaka, and Kumamoto. Ten of the plaintiffs have won their lawsuits. About 40 people, including lawyers, attended the inaugural meeting at the Diet building.

The group is called “No More Hibakusha Lawsuits Nationwide Group of Plaintiffs” and Hidenori Yamamoto, 80, a Tokyo resident, was elected as the group’s leader. Mr. Yamamoto spearheaded the plaintiffs in the class action lawsuits over the A-bomb disease certification system that ended in 2011.

Twenty-seven plaintiffs who filed lawsuits at the Hiroshima District Court have joined the group. Yoshihiko Yagi, 79, who lives in Asaminami Ward, Hiroshima, attended the meeting. He was exposed to the atomic bombing at a location about 1.5 kilometers from the hypocenter. Three years ago he suffered a heart attack, which should be promptly certified as an A-bomb disease under the current system since he satisfies the condition of having been exposed to radiation within about 3.5 kilometers of the hypocenter. The Japanese government, however, turned down his application for certification, saying that Mr. Yagi’s condition is not related to his radiation exposure.

Mr. Yagi filed a lawsuit in September 2012. He is calling for an overhaul of the certification system without delay, saying, “I know many people who are dying and they’re hoping to be certified as suffering from A-bomb diseases before they file lawsuits.”