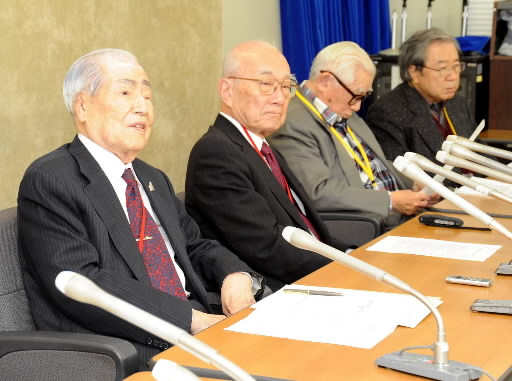 The final report on Japan’s A-bomb disease certification system was submitted on December 4 by a commission of experts under the Ministry of Health, Labour and Welfare. After three years of deliberations, the panel has proven cautious in expanding the scope of the certification criteria. A-bomb survivors in Hiroshima responded with a mixture of disappointment and hope that political moves will still be made to effect changes to the current system.

“The final report is full of flaws!” said Sunao Tsuboi, 88, at a press conference after the commission completed its work. Mr. Tsuboi, chair of the Hiroshima Prefectural Confederation of A-bomb Sufferers Organizations, was a dissatisfied member of the commission. “I must offer my apologies to A-bomb survivors who have been waiting for so long."

Kazuo Okoshi, 73, secretary-general of the other faction of the Hiroshima Prefectural Confederation of A-bomb Sufferers Organization, chaired by Kazushi Kaneko, was also indignant over the outcome. “The commission was established to bridge the gap between the judicial rulings and the government administration, but it dismissed the health effects of residual radiation and internal exposure as scientifically unproven.”

Although the certification criteria were relaxed in 2008, applications for A-bomb disease certification continue to be turned down. Toshiko Naito, 69, a resident of Asaminami Ward, Hiroshima, was exposed to the atomic bombing at a distance of 2.4 kilometers from the hypocenter. Suffering cataracts, she submitted an application for A-bomb disease certification, but it was rebuffed. She is one of the plaintiffs who have filed lawsuits at the Hiroshima District Court. “I don’t think the final report will help provide better relief for the A-bomb survivors. I want our political leaders to make sweeping changes to the certification system,” said Ms. Naito.

Hiroshima Mayor Kazumi Matsui held a press conference and said, “It is regrettable that the final report does not adequately bridge the gap between the government’s certification system and the judicial rulings. Political decisions must be made to improve the system and support the aging survivors.”

The certification criteria were relaxed in 2008 under Prime Minister Shinzo Abe’s first administration. Terumi Tanaka, 81, secretary general of the Japan Confederation of A- and H-Bomb Sufferers Organization (Nihon Hidankyo), said, “The current political environment surrounding the Abe administration is different from that time. Mr. Abe’s enthusiasm is also different.” Mr. Tanaka plans to reach out proactively to the nation’s political parties and call for them to take leadership on this issue.

Commentary: No solution in sight after three years of deliberations

The Ministry of Health, Labour and Welfare’s commission of experts has completed three years of deliberations on the A-bomb disease certification system. The members of the panel from Nihon Hidankyo faced conflicting opinions, from other members, over the pros and cons of the current system, which is based mainly on the concept of “radiation-induced” diseases. Without arriving at any significant solution to the issue, any revisions to the system will now be discussed in the political arena.

At the request of then Prime Minister Naoto Kan, the commission studied the possibility of revising the Atomic Bomb Survivors’ Relief Law to effect changes to the certification system. The only concrete measure proposed in the final report, however, was to “clarify the certification criteria” by detailing the conditions for each disease to render prompt certification. Because the survivors had been watching the deliberations closely, and hoping for more drastic reforms, it comes as no surprise to see their indignation in response to the final report.

The disaster at the nuclear power plant in Fukushima Prefecture, in March of 2011, was one reason for the growing gap in opinions within the commission itself. The members from Hidankyo sought to focus attention on the health effects of internal exposure to radiation and residual radiation from the atomic bombings, areas of research lacking definitive proof. Other members of the panel, though, contended that this would open up issues involving Fukushima, producing enormous consequences, and thus called for the current certification system to be administrated in a stricter fashion, based on scientific evidence.

An association of lawmakers comprised of LDP Diet members will now explore the possibility of a comprehensive revision of the certification system, including a revision of the law, by proposing a bill prepared by legislators. The ruling party as a whole, however, does not appear to be enthusiastic about making changes to the system. Public opinion is needed for the system to be reformed to support the aging survivors.