Hiroshima mourns the death, remembers the life, of Nelson Mandela 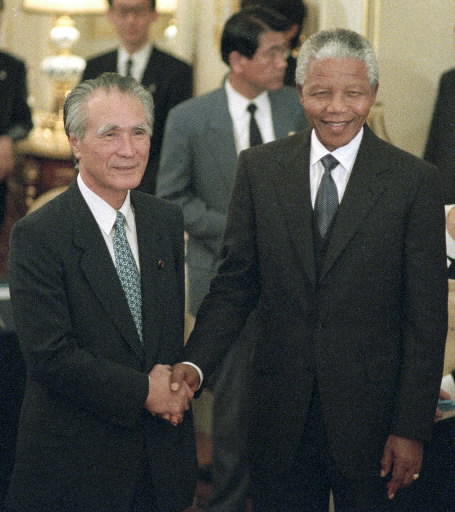 At the news of the death of Nelson Mandela, the former president of South Africa, on December 6, people in Hiroshima who had been associated with Mr. Mandela, and those involved in activities related to peace and human rights, expressed their sorrow. Mr. Mandela, the leader of the South African anti-apartheid movement and a Nobel Peace Prize laureate, was 95.

Yoshihiko Fujimoto, a part-time lecturer in the Faculty of Law of Hiroshima University, said, “I still remember his gentle manner.” Mr. Fujimoto, an expert in South African politics, recalled his experience of the time after Mr. Mandela assumed the presidency in 1994. Mr. Fujimoto was studying in South Africa then and served as an interpreter for a Japanese TV crew.

When the telephone line went dead during the interview, Mr. Mandela said that no technology was perfect and he waited patiently. “Mr. Mandela was considerate to everyone,” Mr. Fujimoto said. “That is exactly why he could realize the great achievement of bringing together the different races of South Africa.”

Takashi Teramoto, 78, visited South Africa in the spring of 2004 as a member of the Hiroshima World Peace Mission, organized by the Hiroshima International Cultural Foundation. Mr. Teramoto, an atomic bomb survivor, visited the prison where Mr. Mandela was jailed. “Mr. Mandela never gave up hope,” said Mr. Teramoto. He continued fighting against discrimination, and he established democracy. We must hand down this great historical achievement.”

Shinji Noma, 51, of the Hiroshima chapter of Amnesty International Japan, said he has learned from Mr. Mandela’s example. “He was a symbol of hope in a battle against discrimination,” he said. “The story of his life has served as a spiritual pillar for our movement.”

Mr. Mandela strove to break the chain of attacks and retaliations between the races and advance the nation through dialogue. Kazuo Okoshi, 73, secretary general of the Hiroshima Prefectural Confederation of A-bomb Sufferers Organizations, chaired by Kazushi Kaneko, lauds Mr. Mandela’s efforts. “He overcame the formidable barrier of discrimination by persevering in his effort to appeal to public opinion.”

Sunao Tsuboi, 88, chair of the other faction of the Hiroshima Prefectural Confederation of A-bomb Sufferers Organizations, said, “His leadership in establishing a peaceful nation was an inspiration to the A-bomb survivors in our work to abolish nuclear weapons.”