International symposium is held in Hiroshima: “Transmitting the Experiences of Hiroshima and Nagasaki to Future Generations” 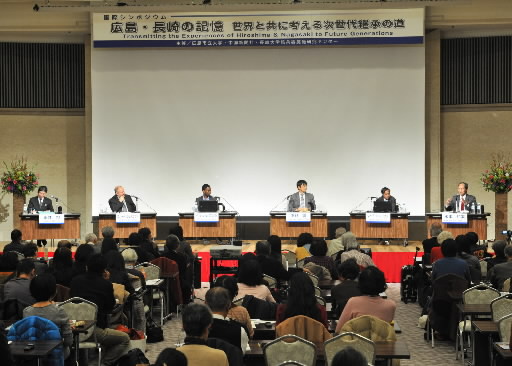 An international symposium was held on the theme of “Transmitting the Experiences of Hiroshima and Nagasaki to Future Generations” at the International Conference Center Hiroshima on December 7. The event was sponsored by Hiroshima City University, the Nagasaki University Research Center for Nuclear Weapons Abolition, and the Chugoku Shimbun. Before an audience of about 430, panelists from inside and outside Japan exchanged views on how to hand down the experiences of the atomic bombings and times of genocide to future generations.

Yves Kamuronsi, the deputy director of the Kigali Genocide Memorial Centre in Rwanda, explained how peace building is being promoted through education so that young people can learn from the past and create a better future. As many as 800,000 to one million people lost their lives in the genocide which swept Rwanda in 1994.

Takeshi Nakatani, a licensed guide at the Auschwitz-Birkenau State Museum in Poland, a Holocaust site, said, “We should extend our reflection from the tragedies themselves to their causes, including prejudice and discrimination, and their historical backgrounds, as well as their impact on the present day.”

Sophearum Chey, the vice chief of the Tuol Sleng Museum in Cambodia, described such efforts as holding educational exhibits at high schools around the country to deepen understanding of the genocide that took place there from 1975 through 1979. Almost two million people are believed to have died during this time.

Kazumi Mizumoto, vice president of the Hiroshima Peace Institute at Hiroshima City University, joined these three speakers in the panel discussion. They agreed that the road to a world without wars or nuclear weapons will be paved by looking squarely at the tragedies that have occurred around the world in the past and handing down these experiences beyond national borders.

Presentations were made by Kenji Shiga, the director of Hiroshima Peace Memorial Museum; students in Hiroshima who write articles on peace issues for the Chugoku Shimbun; and members of the Nagasaki Youth Delegation, composed of students from Nagasaki University who visited the United Nations Office in Geneva, Switzerland, this past spring.