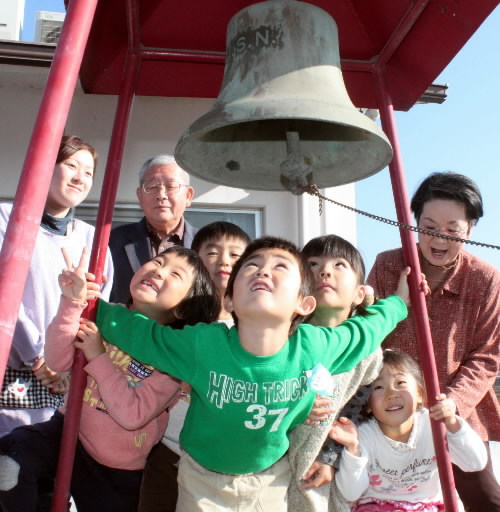 A bell presented by former U.S. President John F. Kennedy to the Japan Evangelical Lutheran Saijo Church in 1962 is still being used by the church. Few people are aware of the background of the bell, but the story has drawn attention after his daughter, Caroline Kennedy, became the U.S. Ambassador to Japan.

The bell is about 50 centimeters high, about 40 centimeters in diameter, and weighs 45 kilograms. It bears the inscription “U.S.N.” When the church was relocated, the bell was moved as well and is now found on the second floor of the building. Children who attend the affiliated Saijo Lutheran Kindergarten ring the bell before devotions. Known as the “Bell of Love,” it has become a symbol of the church and the kindergarten.

According to the church, when George Olson, who was then minister, returned to the United States for a temporary stay, he told friends that the church had no bell for services and other events. A 14-year-old boy who heard this news thought to ask for the president’s help and wrote a letter to the White House.

President Kennedy was moved by the boy’s heartfelt wish and offered a bell from the U.S. Navy, from a decommissioned destroyer. With the aid of a Japanese airline company, the bell was delivered to the Lutheran church in Saijo.

Naoko Maeda, 82, a resident of nearby Hachihonmatsu, was a teacher at the kindergarten then. “Many people kindly helped us with this,” she said. “We were all moved.” She remembers that the bell helped raise awareness of the church among the community.

Caroline Kennedy arrived in Japan in November. Akihiro Kanegae, 69, the current minister of the church and director of the kindergarten, told the children about the bell and decided to ask the ambassador to pay a visit. Letters and pictures are now being prepared by mainly the oldest children of the kindergarten. Ayaka Kochi, 6, said, “The bell has a pretty sound. I want her to hear it.” Yuna Komeda, 6, added, “I want to thank her.”

The letters and their English translations will soon be sent to the U.S. embassy. Mr. Kanegae is thankful that the bell has provided this chance for a reunion and hopes that Ms. Kennedy will visit them when she comes to Hiroshima.