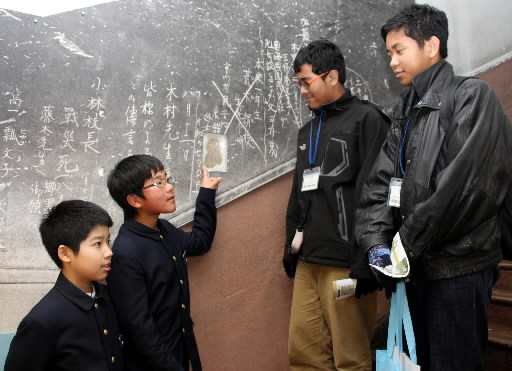 On December 9, students at Fukuromachi Elementary School, located in downtown Hiroshima, provided a guided tour of the school’s peace museum for 32 students from Regent Secondary School in Singapore, conveying to them the tragedy of the atomic bombing and the preciousness of peace. The activity was part of a program sponsored by the City of Hiroshima called the Hospitality Citizens’ Exchange Program.

The students visiting Hiroshima are members of the brass band of Regent Secondary School, here to take part in an exchange through music. Thirty-three sixth-grade students at Fukuromachi Elementary School explained in Japanese, and at times in English, about such places as the walls of the former school building which still bear messages written by A-bomb survivors in the aftermath of the bombing to inform loved ones of their safety, and doors that were hit hard by the blast, their glass blown out.

Sin Hao, 13, a first-year student at Regent Secondary School, said he will tell his friends that nuclear weapons are a terrible thing when he returns home. Akiho Ushiro, 12, a sixth grader at Fukuromachi Elementary School, felt that she was able to convey the horror of the atomic bombing to the students from Singapore.

The students from Regent Secondary School are visiting Japan at the invitation of the city of Akitakata, Hiroshima Prefecture. They performed in a concert at Yoshijima Junior High School in downtown Hiroshima on December 9. On December 15, after a homestay experience in Akitakata, they will head back to Singapore.