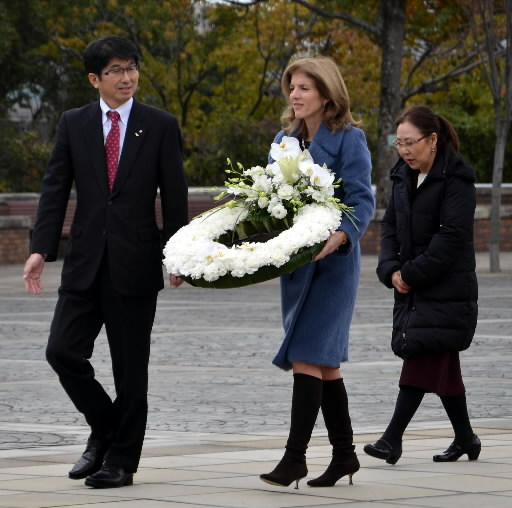 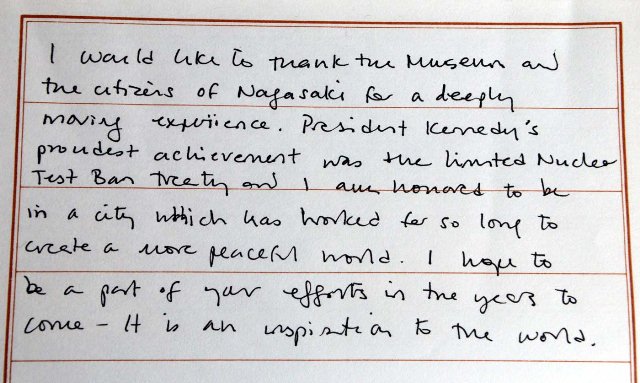 Caroline Kennedy, 56, the new U.S. ambassador to Japan, paid a visit to Nagasaki on December 10. Following a tour of Nagasaki Atomic Bomb Museum and a meeting with A-bomb survivors, the ambassador said that her desire for nuclear disarmament was renewed and she expressed her determination to work for nuclear abolition alongside U.S. President Barack Obama. The visit to Nagasaki marked her first visit to an A-bombed city after assuming the post of ambassador in November.

Ms. Kennedy toured the Atomic Bomb Museum for about 30 minutes. Akitoshi Nakamura, the director of the museum, said that the ambassador was keenly and quietly observing such exhibits as a panoramic model which depicts the destruction of the atomic bombing and the human shadow that was flashed on a wall by the bomb’s heat rays. After her tour, Ms. Kennedy spoke with A-bomb survivors at the museum, including Hideo Tsuchiyama, 88, the former president of Nagasaki University.

After this meeting, Ms. Kennedy stressed to reporters that she is proud of the fact that her father, the late President John F. Kennedy, embarked on efforts for nuclear disarmament by concluding the Partial Test Ban Treaty with the United States, the United Kingdom, and the former Soviet Union. She also said that she would like to lend her support, as much as possible, to the activities of the A-bomb survivors.

In Nagasaki Peace Park, Ms. Kennedy laid a wreath of flowers at the Peace Statue. She also attended a ceremony where dogwood trees were planted in the park. The trees were given by the United States in a symbolic gesture of friendship between the two nations.

After the tree planting ceremony, Ms. Kennedy met with Nagasaki Mayor Tomihisa Taue behind closed doors. The mayor asked that the ambassador request a visit by President Obama to Nagasaki. Mr. Taue said that Ms. Kennedy replied that she would share her perspective with the president, including her feelings from her visit to the city. The mayor went on to say that he believes Nagasaki’s message of peace had been conveyed and that he hopes Ms. Kennedy’s visit will mark a step toward a visit by the president himself.

Caroline Kennedy visited Hiroshima on her first trip to Japan back in 1978. When she met with Shigeru Ishiba, the secretary general of the Liberal Democratic Party, on December 6, she was asked to visit the A-bombed cities and she responded that she would like to visit Hiroshima, too.

Comments made by Caroline Kennedy, U.S. ambassador to Japan

Her visit to Nagasaki’s Atomic Bomb Museum moved her deeply.

She would like to lend her support, to the extent possible, to the activities of the A-bomb survivors and others.

She is proud of the fact that her father, the late President John F. Kennedy, initiated efforts for nuclear disarmament, and that the members of her family share this line of thought.

Her desire for nuclear disarmament was renewed after her visit to the Atomic Bomb Museum.