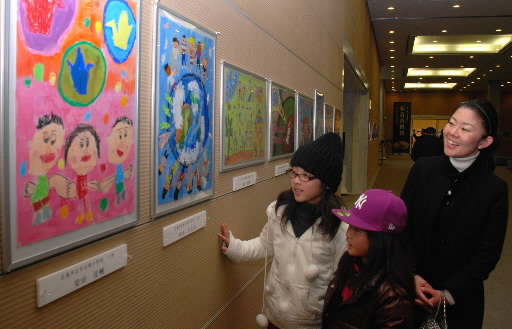 The awards ceremony for the Children's Peace Drawing Competition was held at Hiroshima Peace Memorial Museum on December 14. The competition is sponsored by the City of Hiroshima and other entities.

Excellence Awards were presented to three students. Kai Fujimoto, 12, a sixth-grader at Kanon Elementary School, made a picture of the Atomic Bomb Dome and a large tree. Another winner is Kana Tsumura, 15, a third-year student at Shiraki Junior High School, who depicted the Children’s Peace Monument and flowers. Michaella Noof Albao, 14, a second-year student at a junior high school in Australia, also won for her picture of doves.

After receiving the award certificate and a commemorative gift, Kai said, “I tried to create an impression of Hiroshima’s reconstruction.” Kana commented, “I hope people of my generation will think about peace when they look at these pictures.” The three pictures which won the Excellence Award, 39 pictures honored with the Distinction Award, and 70 pictures that were given the Award of Merit will be on display at the museum until January 23, 2014.