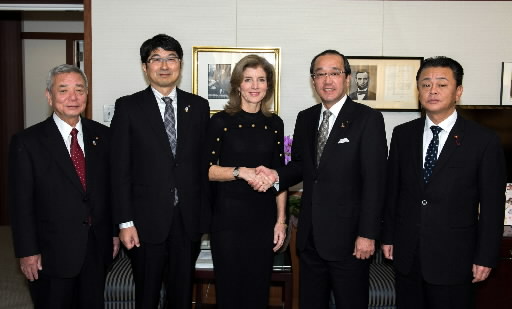 On December 16, Hiroshima Mayor Kazumi Matsui and Nagasaki Mayor Tomihisa Taue met with Caroline Kennedy, the U.S. ambassador to Japan, at the U.S Embassy in Tokyo and requested that President Barack Obama visit the A-bombed cities. Ms. Kennedy reportedly said that if the two cities send a letter of invitation to the president that he would surely consider it. She also expressed her desire to visit Hiroshima at an early date.

In the closed-door meeting, the mayors shared their hopes for Ms. Kennedy, who has taken up the vision of her father, the late President John F. Kennedy, who advocated dialogue and concluded the Partial Test Ban Treaty with the former Soviet Union and the United Kingdom. Mr. Matsui and Mr. Taue handed Ms. Kennedy their letter of request, hopeful that she will serve as a new bridge linking Japan and the United States and help realize Mr. Obama’s visit to the A-bombed cities.

After the meeting, Mr. Matsui said that he sensed Ms. Kennedy’s desire to build a world without nuclear weapons and that she will actively consider a visit to Hiroshima at an early date. He also said that Ms. Kennedy made comments indicating her possible attendance at the ceremonies held by the two cities on August 6 and 9 to mark the atomic bombings.

In line with Ms. Kennedy’s suggestion, the two mayors have decided to send a letter of invitation to President Obama in the near future, since the president may be visiting Japan next April. The cities of Hiroshima and Nagasaki also sent letters of invitation to Mr. Obama in 2009 and 2012.