Opposition is voiced to stricter standards for A-bomb disease certification 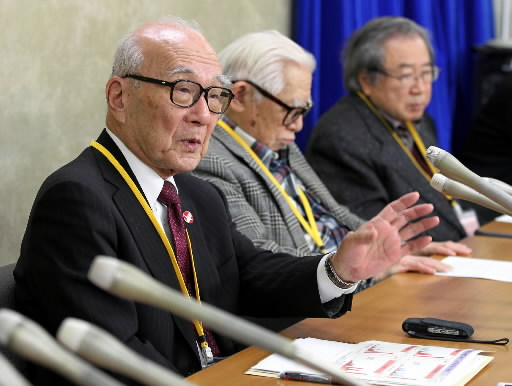 The Ministry of Health, Labour and Welfare (MHLW) announced revisions to the A-bomb disease certification system on December 16, saying that the number of certified survivors will increase under the new criteria. These new standards, however, present stricter limits on the survivors’ locations from the hypocenter in order to be certified for major non-cancerous diseases. As a result, some survivors will not be eligible for certification under the revised system. The Japan Confederation of A- and H-Bomb Sufferers Organizations (Nihon Hidankyo) and others are strongly opposed to this decision, saying that the move will not bridge the gap between the government certifications and the judicial rulings over this issue.

“I’m really frustrated,” said Mikiso Iwasa, 84, gritting his teeth. “I can’t die in such despair.” Mr. Iwasa is an executive director of Nihon Hidankyo and a resident of Funabashi City, Chiba Prefecture.

A-bomb survivors from across Japan have recounted their experiences in court, wanting the government to acknowledge that their diseases are attributable to the atomic bombings, and they have won case after case. The revised certification system, however, contradicts these court rulings.

Tomoyuki Mimaki, 71, secretary-general of the Hiroshima Prefectural Confederation of A-bomb Sufferers Organizations, chaired by Sunao Tsuboi, said, “A few changes in the condition involving distances from the hypocenter won’t address the actual circumstances of the survivors. I can hardly accept this.”

Discussions on reviewing the system focused mainly on how to clarify the connection between the survivors’ exposure to A-bomb radiation and diseases (radiation-induced diseases). Nihon Hidankyo’s call for creating a system that covers all diseases which may have been induced by A-bomb radiation was denied.

“From the beginning, the national government has not paid enough attention to the health effects of residual radiation or internal exposure to radiation,” said Kazuo Okoshi, 73, secretary-general of the other faction of the Hiroshima Prefectural Confederation of A-bomb Sufferers Organizations, chaired by Kazushi Kaneko. He was indignant at the revised certification system.

According to the liaison association of the nationwide group of lawyers who are supporting the class action lawsuits over A-bomb disease certification, among the eight plaintiffs who won lawsuits at the Osaka District Court this past August, only one falls under the new certification criteria.

Deliberations on the revision began in 2009, when the coalition government at that time, consisting of the Liberal Democratic Party and New Komeito, agreed to work with Nihon Hidankyo to put an end to the class action lawsuits. “We will evaluate how the revised system works, and if necessary, we will improve it,” said Minoru Terada, an LDP member from Hiroshima’s fifth constituency and a leader of the parliamentarians’ association to promote relief to the A-bomb survivors.

Yukihiko Yasuhara, vice president of the nationwide group of lawyers, also said in indignation, “This is a message from the national government, declaring an end to reviewing the system.” Terumi Tanaka, 81, secretary-general of Nihon Hidankyo, said, “Winning lawsuits will continue to be the only way to win certification.”

It took roughly three years to review the criteria of the certification system, but, in the end, only minor changes were made. The revised system cannot provide adequate relief to the survivors suffering from ill health and will not put an end to the lawsuits filed by A-bomb survivors. A fundamental solution cannot be expected unless a serious effort is made to review the system, including a revision of the Atomic Bomb Survivors’ Relief Law.

An MHLW subcommittee on medical care for A-bomb survivors, of which 24 members were present that day, evaluated the new A-bomb disease certification system and raised question after question concerning the proposed revision, saying, for example, “As a scientist, I can’t approve this criteria.” Some, however, said that considering the advancing age of the survivors, the proposal should be approved. The subcommittee eventually put priority on the survivors, and agreed to move forward with the proposed revision.

Survivors who observed the subcommittee meeting expressed their mounting frustration, saying, “Those experts don’t really understand the damage caused by the atomic bombings.” The fact that the survivors are denied relief merely because science today is unable to definitively prove the connection between A-bomb radiation exposure and A-bomb disease is a cruel state of affairs.

Relaxing the standards, or curtailing relief. With the new criteria drawing clear lines, there are concerns that some survivors may not have access to relief measures. It should not be the case that the desperate request of aging survivors can only be heard in court. There is now little time left to properly review the system.