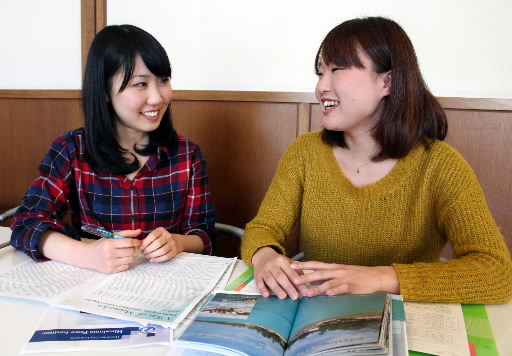 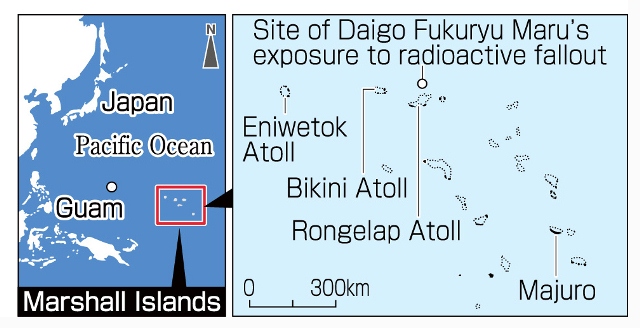 To commemorate the 60th anniversary of a hydrogen bomb test conducted by the United States at the Bikini Atoll, a workshop will be held between February 28 and March 3 in the Marshall Islands. Young people from four nuclear-bomb-affected parts of the world will meet and exchange views in Majuro, the capital of the Republic of the Marshall Islands, located in the central Pacific Ocean where the nuclear test was carried out. The workshop is being organized by Robert Jacobs, an associate professor of history at Hiroshima City University, and an Australian researcher, among others. Two students from Hiroshima City University will take part in the workshop. In the aftermath of the hydrogen bomb test on March 1, 1954, a Japanese tuna fishing boat called the Daigo Fukuryu Maru (The Lucky Dragon No. 5) was exposed to radioactive fallout.

The two students are Mariko Oda, 20, a resident of Hatsukaichi, a city near Hiroshima, and Kana Miyoshi, 19, a resident of Saeki Ward. Ms. Oda’s grandmother was exposed to the atomic bombing of Hiroshima. Last summer, she participated in an intensive course offered by the university and learned about the atomic bombing and peace building with students from overseas. As a result, her interest in nuclear issues grew and she decided to join the workshop.

Ms. Miyoshi’s grandparents experienced the atomic bombing. Her grandmother escaped being directly exposed to the bomb because, as a child of 7, she had been evacuated earlier to a rural area from her house in the Funairi Honmachi district in central Hiroshima. But when she returned to the city to search for her father, she suffered exposure to the bomb’s radiation. Ms. Miyoshi’s grandmother also lost her father and her brother in the bombing. As a third-generation survivor, Ms. Miyoshi is determined to do what she can to promote Hiroshima’s message of peace.

The participants of the workshop will come from the Marshall Islands, Kazakhstan, where many people became victims of radiation exposure as a result of nuclear tests conducted by the former Soviet Union, and Australia, where Aborigines, the indigenous inhabitants of Australia, and others were harmed by their exposure to radiation from nuclear tests performed by the United Kingdom. The young people will report on the damage that has resulted from these nuclear incidents and exchange ideas on what they can do to help build a peaceful world. After returning home, they will film accounts of compatriots who were exposed to radiation and make these videos available online.

Ms. Miyoshi commented, “I can learn about the damage caused by radiation in other countries through this exchange.” Ms. Oda said, “I’m looking forward to talking about peace and the idea of nuclear deterrence. Taking advantage of this opportunity, I hope we’ll be able to work together well and send messages about the peril of nuclear weapons.”

Nuclear tests in Australia
Between 1952 and the 1960s, the United Kingdom conducted nuclear tests in the Monte Bello Islands, which lie off the coast of Western Australia, and at Maralinga, a desert area in southern Australia. The number of large-scale experiments alone reached 12. Aborigines, the indigenous people of Australia, and Australian servicemen who were mobilized for the tests, among others, were exposed to radiation from the radioactive fallout. There was reportedly a “black fog,” and the indigenous people complained of diarrhea, nausea, and eye pain.