Hiroshima native living in U.S. seeks city’s cooperation on film version of book about A-bomb experiences of her parents 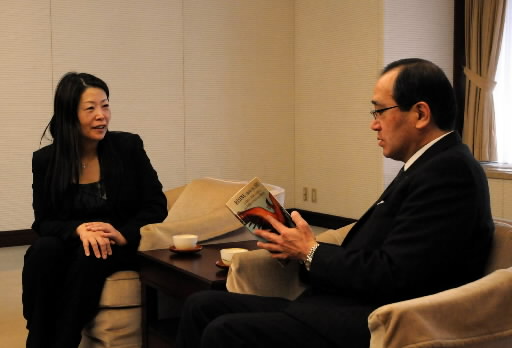 Akiko Mikamo, 52, a second-generation A-bomb survivor who lives in San Diego, California, met with Hiroshima Mayor Kazumi Matsui to ask for the cooperation of the City of Hiroshima in making a movie based on her book. Rising from the Ashes: A True Story of Survival and Forgiveness from Hiroshima, which was written in English and published last year, recounts the experiences of her parents in the atomic bombing.

Ms. Mikamo handed her book to Mr. Matsui and said, “Film director Oliver Stone said that he was moved by this book. A Hollywood producer has agreed to oversee the project, and the screenplay is almost ready.” She said her idea was to present “Hiroshima from the aspect of humanity, not animosity or ill will.”

Mr. Matsui replied, “I will do what I can to help.” He added, “My youngest daughter (28) loves English and, in fact, she has read your book.”